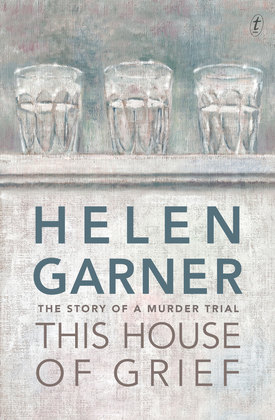 Anyone can see the place where the children died. You take the Princes Highway past Geelong, and keep going west in the direction of Colac. Late in August 2006, soon after I had watched a magistrate commit Robert Farquharson to stand trial before a jury on three charges of murder, I headed out that way on a Sunday morning, across the great volcanic plain.

On the evening of 4 September 2005, Father’s Day, Robert Farquharson, a separated husband, was driving his three sons home to their mother, Cindy, when his car left the road and plunged into a dam. The boys, aged ten, seven and two, drowned. Was this an act of revenge or a tragic accident? The court case became Helen Garner’s obsession. She followed it on its protracted course until the final verdict.

In this utterly compelling book, Helen Garner tells the story of a man and his broken life. She presents the theatre of the courtroom with its actors and audience, all gathered for the purpose of bearing witness to the truth, players in the extraordinary and unpredictable drama of the quest for justice.

I have been aware of Helen Garner as a writer for many years, but not actually read anything by her during the life of this blog. While you may not see it as much of a movement to go from crime fiction to true crime, reading this book was part of my attempt to read a little more widely than usual.

Ten months after his car left the main road and veered into a dam, drowning his three young sons, Robert Farquharson was committed for trial on three counts of murder. A year passed between the committal hearing and the trial.  Farquharson spent that time on bail, a free man.

Helen Garner and a close friend's daughter, a sixteen year old taking a gap year, squeezed into the press seats with the journalists. The trial would take over five months and Garner was there every day. She takes the reader through the highs and lows of the court room, the mind-numbingness of evidence and expert opinions, and shows us clearly how difficult it is to get to the truth. Her account is detailed, but at the same time she struggles to keep an open mind, and we watch as she swings like a pendulum. By the time the jury goes out to consider its verdict we still don't know which way they will jump.

Garner takes us further than the original trial, into the second trial after the verdict of the first is declared invalid. She shows us clearly the effects not only on Farquharson, but on his former wife, and on the family and friends.

There is nothing dry about this book. It reads as well as any crime fiction. Garner pays a lot of attention to character study, and she also tells us how what she is witnessing affects her personally.

Helen Garner was born in 1942 in Geelong, and was educated there and at Melbourne University. She taught in Victorian secondary schools until 1972, when she was dismissed for answering her students’ questions about sex, and had to start writing journalism for a living.

Her first novel, Monkey Grip, came out in 1977, won the 1978 National Book Council Award, and was adapted for film in 1981. Since then she has published novels, short stories, essays, and feature journalism. Her screenplay The Last Days of Chez Nous was filmed in 1990. Garner has won many prizes, among them a Walkley Award for her 1993 article about the murder of two-year-old Daniel Valerio. In 1995 she published The First Stone, a controversial account of a Melbourne University sexual harassment case. Joe Cinque’s Consolation (2004) was a non-fiction study of two murder trials in Canberra.

In 2006 Helen Garner received the inaugural Melbourne Prize for Literature. Her most recent novel, The Spare Room (2008), won the Victorian Premier’s Literary Award for Fiction, the Queensland Premier’s Award for Fiction and the Barbara Jefferis Award, and has been translated into many languages.
Helen Garner lives in Melbourne.

Oh, this does sound compelling, Kerrie. Sometimes those real life stories and trials are at least as gripping as any crime novel is.