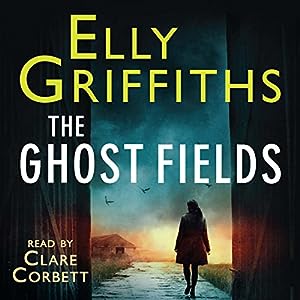 Norfolk is experiencing a July heat wave when a construction crew unearths a macabre discovery - a buried World War II plane with the pilot still inside. Forensic archaeologist Ruth Galloway quickly realizes that the skeleton couldn't possibly be the pilot, and DNA tests identify the man as Fred Blackstock, a local aristocrat who had been reported dead at sea.

When the remaining members of the Blackstock family learn about the discovery, they seem strangely frightened by the news. Events are further complicated by a TV company that wants to make a film about Norfolk's deserted air force bases, the so-called Ghost Fields, which have been partially converted into a pig farm run by one of the younger Blackstocks. As production begins, Ruth notices a mysterious man lurking close to the Blackstocks' family home. Then human bones are found on the family's pig farm.

Can the team outrace a looming flood to find a killer?

Ruth Galloway, forensic archaeologist from North Norfolk University, is excavating a Iron Age dig when the buried World War II plane is discovered in Devil's Hollow, land that used to be part of the Blackstock Estate, now being "developed". Ruth is called to the site by her friend DI Harry Nelson. She quickly comes to the conclusion that the body in the cockpit was not only murdered but, although it has been dead for decades, has only recently been moved there from its original burial site.

There is quite a lot going on in this novel, including personal developments in Ruth's life.  It does help to have read earlier novels in the series, particular for appreciating the development of recurring characters. A DNA project reveals that one of Nelson's team has Blackstock blood, and then two people are attacked, presumably because they are connected to the Blackstock family.

English weather plays a major part in events too as the July heat wave comes to an end with rain storms and high tides. Blackstock Hall is cut off from the main roads by rising water, and Ruth hears a murderer's confession that puts her in real danger.

I have to admit to a real soft spot for this series, Kerrie. Glad you enjoyed this one.