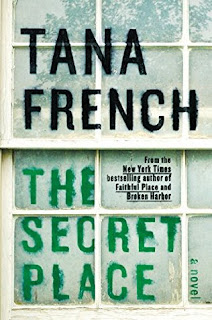 The photo shows a boy who was murdered a year ago. The caption says, "I know who killed him".

Detective Stephen Moran hasn't seen Holly Mackey since she was a nine-year-old witness to the events of Faithful Place. Now she's 16 and she's shown up outside his squad room, with a photograph and a story. Even in her exclusive boarding school, in the graceful golden world that Stephen has always longed for, bad things happen and people have secrets.

The previous year, Christopher Harper, from the neighbouring boys' school, was found murdered on the grounds. And today, in the Secret Place - the school noticeboard where girls can pin up their secrets anonymously - Holly found the card. Solving this case could take Stephen onto the Murder squad. But to get it solved, he will have to work with Detective Antoinette Conway - tough, prickly, an outsider, everything Stephen doesn't want in a partner. And he will have to find a way into the strange, charged, mysterious world that Holly and her three closest friends inhabit and disentangle the truth from their knot of secrets, even as he starts to suspect that the truth might be something he doesn't want to hear.

From the multi-award-winning author of Sunday Times and New York Times best seller In the Woods, The Secret Place is a searing novel of psychological suspense.

I must confess that I originally started reading a copy of this from my local library, but at over 800 pages it proved to be a weighty tome, so I bought a Kindle version.

Detective Stephen Moran really wants to move from the Cold Case squad back into the Murder Squad which is why he decides to deliver the card which Holly Mackey has brought him to Antoinette Conway in person. Strictly speaking he should just hand the card over but he is angling for an invitation to sit in on wherever Conway's investigation takes her. Conway is excited with what looks like a breakthrough ina case that has been stagnating for most of a year.

It comes as a surprise to realise that the main events of THE SECRET PLACE take place in the space of a day. That is not entirely true because Chris Harper has been dead a year and some of the narrative predates his death by a further fifteen months or so. The various strands of plot lines are cleverly juxtaposed, almost seamlessly, although the reader is never in any doubt about which time frame they are in. From time to time the reader is told how much longer Chris Harper has to live.

The novel focusses on the girls at Kilda's boarding school who had most to do with Chris Harper. In that sense the questioning covers old ground, looking for something that Conway and her team missed in the days immediately after the murder. Solving the crime is incredibly important to Conway - she feels she is on the brink of being dropped from the Murder Squad. It is important too to Stephen  Moran that he establishes a good working relationship with Conway, and there are times when he fears he has messed up his chance.

The novel too is a study of how the teenage female mind works. It explores the spitefulness of gangs of girls in the closed boarding house atmosphere. It also looks at the damage that the events in the boarding house grounds have already inflicted on the school. But above all - who wrote the card and left it on the noticeboard, and, most importantly, who killed Chris Harper?

A complex and rewarding read.

This novel reminded me that I must read more from the Dublin Murder Squad series.

I love this loosely connected series. Each book is a bit different from the previous and I'm always eager to see what the new entries will bring. I liked this one very much. I think I might do a re-read of all of these by listening to them.

Glad to hear you are enjoying it.

I'm glad you enjoyed this one, Kerrie. Some of the Dublin Squad novels really are fine.

I liked this one, too, but it took me awhile to get into it. I nearly gave up, but then the dynamics between the two police detectives get interesting and the dialogue sharp.

The teenage girls didn't all interest me. A few were more interesting than others, including the one who had put up the picture.

But all in all, Tana French can't write a bad book in my view, although her writings do vary. In the Woods, Faithful Place and The Likeness were favorites of mine.