Review: DOWN AMONG THE DEAD MEN, Peter Lovesey 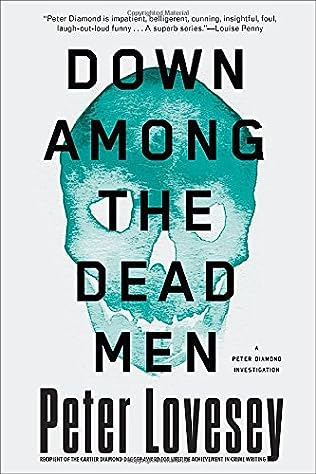 A nightmare discovery in the boot of a stolen BMW plunges car thief Danny Stapleton into the worst trouble of his life. What links his misfortune to the mysterious disappearance of an art teacher at a private school for girls in Chichester?

Orders from above push Peter Diamond of Bath CID into investigating a police corruption case in the Chichester force, and he soon finds himself reluctantly dealing with spirited schoolgirls, eccentric artists and his formidable old colleague, Hen Mallin.

Peter Diamond's boss Georgina Dallymore has been asked by colleague Archie Hahn to investigate corruption charges against one of his DCIs. Hen Mallin has already been suspended and Hahn wants to know what he should do next. He is expecting Dallymore to really rubber stamp his decision at the same time as making what appears to be an impartial investigation.

Georgina takes Peter Diamond to Chichester with her to assist in the investigation. She really likes the sound of Dallymore & Diamond, detectives, but she lives in false hope if she thinks she can control Peter Diamond. What she doesn't realise is how he manipulates her.  Instead of focussing on Mallin's lapse Peter tries to work out how the body came to be in the boot of the BMW and that leads him to the real cause of why Hen Mallin has been suspended.

There are lots of tongue-in-cheek moments in this novel which made it a delight to read. Even the title is tarred with an ironic brush.

And I see there is another Peter Diamond title to look for this year.

I really like the Diamond books, and haven't read this one - must look out for it.

I read the first Peter Diamoned novel and didn't love it. How does this novel compare to the Peter Diamond books?