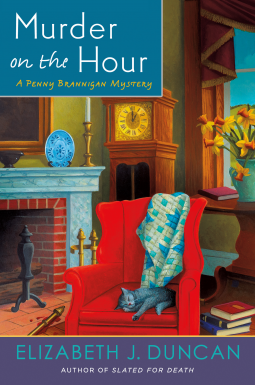 The residents of Llanelen are brimming with excitement. Antiques Cymru, a regional take on the popular national TV show, is coming to the Welsh town and people are flocking from miles around, hoping their attic treasures turn out to be worth a fortune. On the day of filming, quiet local sheep farmer Haydn Williams brings a generations-old long-case clock for evaluation, while the woman he's always admired from afar, Catrin Bellis, turns up with a cherished handmade quilt. Will either hear surprising good news about the value of their family heirlooms? By the end of the day, Catrin turns up dead, her quilt missing.

Who could have wanted this shy, quiet woman - who had been overshadowed by her parents for her whole life - dead? Delving into Catrin's past, spa owner and amateur sleuth Penny Brannigan is surprised to discover that Catrin had at least one enemy. And as Penny's romantic life heats up with a new love interest, she realizes that a mysterious document hidden in Haydn's clock could hold the key to a long-forgotten secret and a present-day murder.

All of the novels in this series are set in the small fictional Welsh town of Llanelin and feature Penny Brannigan, part owner of a local beauty salon known as The Spa, her friend and partner Victoria, and D.I. Gareth Davies.

In MURDER ON THE HOUR, Gareth Davies has recently retired and Penny isn't seeing so much of him. The main action centres around the coming of popular national tv show, Antiques Cymru, to the town. People search for an object or two they can present for evaluation and maybe a chance to be featured on television.

The novel has all the elements of an entertaining cozy, and works quite well as a stand-alone, although I undoubtedly would have been better off had I read any of the earlier novels. Nothing happens in this small town without most of the residents being aware of it, and yet a murder takes place, and there are few clues why.

About this author
Elizabeth J. Duncan has worked as a writer and editor for some of Canada's largest newspapers, including the Ottawa Citizen and Hamilton Spectator. She lives with her dog, Dolly, in Toronto where she teaches in the public relations program at Humber College. She enjoys spending time each year in North Wales and is the first Canadian writer to win the Malice Domestic Best First Traditional Mystery Novel Competition. The Cold Light of Mourning, her first novel, is also the winner of the William F. Deeck-Malice Domestic Grant and was shortlisted for an Agatha and an Arthur Ellis Award.