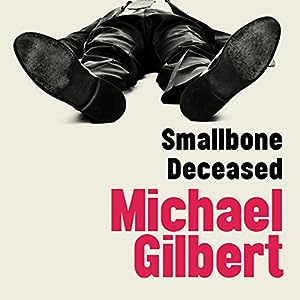 Another classic Michael Gilbert thriller, set within the legal profession. The mystery begins when the body of a client is found dead in a deed-box of the impeccable legal firm of Horniman, Birley and Crane. But why? And how was the Horniman system broken? A classic English murder mystery.

Michael Francis Gilbert ( 1912- 2006) is recognized as one of the most versatile British mystery writers. He was a lawyer in London for many years and at one point had Raymond Chandler as his client. He wrote almost every sort of mystery and thriller. He wrote police procedurals, spy novels and short stories, courtroom dramas, classical mysteries, crime novels, and almost every possible combination of these, all with the same competence and dry, detached wit.

Gilbert was a founding member of the British Crime Writers Association, Named Grand Master by the Mystery Writers of America and was named Number 24 on The Telegraph's "50 crime writers to read before you die".

When the senior partner of the firm Horniman, Birley and Crane, Abel Horniman dies, his son Bob, a war hero from the Navy, takes over his share of the partnership. Bob needs to find Mr Smallbone who is a co-trustee of one of the accounts his father managed. In addition there appears to be some money missing.  Everybody he contacts thinks that Smallbone, an avid collector of ancient artifacts, has gone off to Rome on a buying trip. The discovery of his body thus comes as a surprise although the reader always knows that he is dead from the title of the story.

Someone who has recently begun working at the firm becomes the amateur sleuth especially after there is a second death. Inspector Hazelrigg from the Yard pursues enquiries too and separately they come to the same conclusion.

This is a sort of "sifting the evidence" book, eliminating suspects one by one, but even so the author has a surprise in store for us. As the blurb says, a classic English murder mystery.

About the author
(Michael Francis Gilbert)

Born in Lincolnshire in 1912, Michael Francis Gilbert was educated in Sussex before entering the University of London where he gained an LLB with honours in 1937. Gilbert was a founding member of the British Crime Writers Association, and in 1988 he was named a Grand Master by the Mystery Writers of America - an achievement many thought long overdue. He won the Life Achievement Anthony Award at the 1990 Boucheron in London, and in 1980 he was knighted as a Commander in the Order of the British Empire. Gilbert made his debut in 1947 with Close Quarters, and since then has become recognized as one of our most versatile British mystery writers.

To my shame I have not read much by Michael Gilbert, but I did read this one several years ago and it knocked my socks off.

Everyone has writers whose work finds the mark every time, and Michael Gilbert is one of mine. I've enjoyed everything I've ever ready by him, and have the second Hazelrigg mystery waiting on me right now.