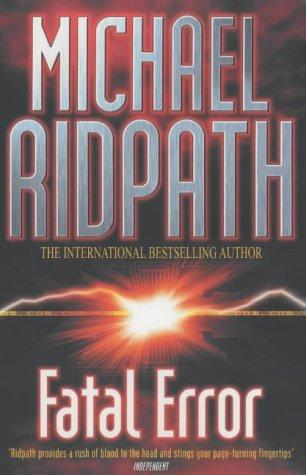 Set against the ferocious rise and spectacular fall of the dot.com industry, Michael Ridpath serves up another scintillating thriller.

The year is 1999 and Internet companies are springing up everywhere. Anything seems possible for those who think big. So when David Lane - a quiet, cautious banker - is invited by his old friend Guy Jourdan to help start up ninetyminutes.com he decides that for once he will do something daring, something dangerous. If only he'd realised quite how dangerous. Because Guy falls out with Tony Jourdan, his father and their biggest investor, bringing the company close to collapse. Then Tony is murdered - and David's rollercoaster ride into danger and disaster begins.

Michael Ridpath takes us into a world about which I know very little. His story though feels very credible.

Guy Jourdan, failed actor, has the idea for a startup dot.com company, a website that will deal only with football, and will atract those who not only want to see results, but articles to read, and merchandise. It will eventually become the number one site for European football fans.

Guy's father is a millionaire, a very successful businessman and Guy wants to follow in his footsteps, and to outdo him. The dot.com boom offers a way to make quick money, but in order to do that you have to borrow lots and then manage it well. And that is where his old boarding school roommate, David Lane, comes in. David will provide the financial expertise, and Guy's brother Owen will be the technical wizard.

There have been a couple of incidents in the past, one where Guy's stepmother was killed, and one where Guy nearly crashed a plane into a mountain, which have resulted in estrangement between Guy and David, so David is very surprised when Guy contacts him about the new venture. Between them they manage to put together a small amount of money to get started,

When the first lot of money runs out  Guy approaches his father Tony for a two million pound loan. Tony, who dislikes David, obliges but wants an 80% share of the company. Shortly after he and Guy have a big argument Tony is killed by a hit and run driver. David reflects that something or someone keeps coming to Guy's rescue. And that is where things begin to get interesting and dangerous.

Quite a good thriller with some anonymous death threats providing mystery and spice. David thinks he knows who is behind them, and they serve to show what a dangerous world this is.

Michael Ridpath spent eight years working as a bond trader at an international bank in the City of London. He is the author of Free to Trade, Trading Reality, The Marketmaker, Final Venture, The Predator, On the Edge and See No Evil. The latter two feature his new series character Alex Calder. He grew up in Yorkshire, and now lives in North London with his wife and three children.