Review: THE ELEGANCE OF THE HEDGEHOG, Muriel Barbery - audio book 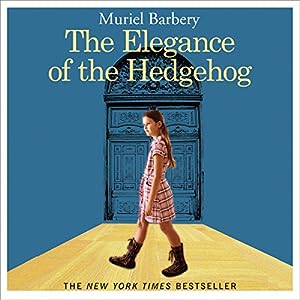 An enchanting New York Times and international best seller and award-winner about life, art, literature, philosophy, culture, class, privilege, and power, seen through the eyes of a 54-year-old French concierge and a precocious but troubled 12-year-old girl.

Renee Michel is the 54-year-old concierge of a luxury Paris apartment building. Her exterior (short, ugly,and plump) and demeanor (poor, discreet, and insignificant) belie her keen, questing mind and profound erudition. Paloma Josse is a 12-year-old genius who behaves as everyone expects her to behave: a mediocre pre-teen high on adolescent subculture, a good but not outstanding student, an obedient if obstinate daughter. She plans to kill herself on the 16th of June, her 13th birthday.

Both Renee and Paloma hide their true talents and finest qualities from the bourgeois families around them, until a wealthy Japanese gentleman named Ozu moves into building. Only he sees through them, perceiving the secret that haunts Renee, winning Paloma's trust, and helping the two discover their kindred souls. Moving, funny, tender, and triumphant, Barbery's novel exalts the quiet victories of the inconspicuous among us.

This novel is a departure into the world of non-crime fiction.
Perhaps listening to the audio version was probably not my best move because it tends to turn the  book into a series of short vignettes. Nevertheless I enjoyed the venture into philosophy in the form of the thoughts of both Renee the concierge and Paloma the teenage school girl.

The novel consists of items from Paloma's journal as she contemplates the meaning of life and Renee's narration about her life as the concierge of a large residential building. The two gradually interweave with each other and pictures are created of other residents in the building and there is a progression of events. In addition there is quite a bit of background about Renee's life over the years.

In the long run I enjoyed it more than I expected to, as I too thought about the philosophical issues they raised.

Muriel Barbery (born 28 May 1969) is a French novelist and professor of philosophy.
Her novel L'Élégance du hérisson (translated into English by Alison Anderson as The Elegance of the Hedgehog) topped the French best-seller lists for 30 consecutive weeks and was reprinted 50 times. By May 2008 it had sold more than a million copies. It has been a bestseller in France, Italy, Germany, Spain, South Korea, and in many other countries. It concerns the inhabitants of a small upper-class Paris apartment block, notably its crypto-intellectual concierge, Renée. She and Paloma, the likewise intellectual (even radical) teenage daughter of a resident family, narrate the book in turn. Renée also features briefly in Barbery's first novel, Une Gourmandise, which appeared in Anderson's English translation as Gourmet Rhapsody in 2009. The Elegance of the Hedgehog was also turned into a film called Le Hérisson (in English The Hedgehog), directed by Mona Achache. It was released in 2009.