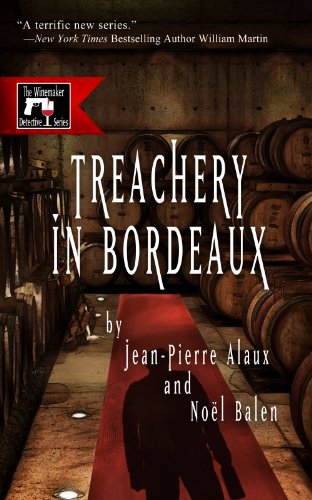 Treachery in Bordeaux is the first book in the beloved Winemaker Detective novels, the "addictive" French series featuring master winemaker Benjamin Cooker and his sidekick Virgile. When some barrels turn at the prestigious grand cru Moniales Haut-Brion wine estate, Cooker and Virgile start to investigate. Is it negligence or sabotage? They search the city and wine region for answers, welcoming readers into the underworld of a global luxury industry. Grab a glass of your favorite Bordeaux and delve into a world of money, deceit, inheritance, greed, and fine wine.

Brimming with description, intrigue, and compelling characters, Treachery in Bordeaux kicks off this unbeatable series, which was adapted to television in France.

My impression is that with this series, now 22 titles, the reader can take a virtual tour of French wine regions, learning about both wine and food, but indulging in cozy mysteries at the same time. Perhaps a good series to read in preparation for an upcoming trip to France?

This is the debut title, and begins with master winemaker Benjamin Cooker taking on a new assistant and then going to the assistance of a winemaker friend who has found that 6 barrels of his prestigious wine have become contaminated.  Benjamin and Virgile try to not only cleanse the wine of a yeast infection but also to identify the source of the infection.

The winery they are assisting is in an area where many great chateaux have disappeared, their vineyards and even the buildings themselves demolished to make way for intensive housing development. So there is a lot of historical detail, perhaps a little too much for my liking. There is also a lot of scientific detail about how the yeast infection is treated. Added in too are recipes and notes about the culinary delights of the Bordeaux area.

It is interesting to note that these books have become the basis of a popular French television series.

About the authors
Jean-Pierre Alaux is a magazine, radio and television journalist when he is not writing novels in southwestern France. He is a genuine wine and food lover and recently won the Antonin Carême prize for his cookbook La Truffe sur le Soufflé, which he wrote with the chef Alexis Pélissou. He is the grandson of a winemaker and exhibits a real passion for wine and winemaking. For him, there is no greater common denominator than wine. He gets a sparkle in his eye when he talks about the Winemaker Detective series, which he writes with Noël Balen. It is a 20-strong series that is a hit on French television and is now being translated into English by Le French Book.

Noël Balen lives in Paris, where he shares his time between writing, making records, and lecturing on music. He plays bass, is a music critic and has authored a number of books about musicians in addition to his novel and short-story writing. He is a real Epicure and he shares his passion for fine wine in the Winemaker Detective series that he co-authors with Jean-Pierre Alaux. This 20-strong series is a hit on television in France, and is being translated into English by Le French Book

I love this series! It's my favourite cozy!

Here is a reaction that will surprise you: I urge anyone who is an alcoholic to avoid these books. :)