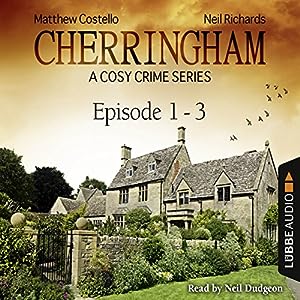 Jack's a retired ex-cop from New York, seeking the simple life in Cherringham. Sarah's a Web designer who's moved back to the village find herself. But their lives are anything but quiet as the two team up to solve Cherringham's criminal mysteries.

This compilation contains episodes 1 - 3: MURDER ON THAMES, MYSTERY AT THE MANOR and MURDER BY MOONLIGHT.

Here Jack and Sarah investigate a suicide in the River Thames - or was it murder? They investigate an "accidental" fire with deadly consequences, and they nab the culprit behind the Rotary Club choir poisoning.

Cherringham is a series à la Charles Dickens, with a new mystery thriller released each month. Set in the sleepy English village of Cherringham, the detective series brings together an unlikely sleuthing duo: English web designer Sarah and American ex-cop Jack. Thrilling and deadly - but with a spot of tea - it's like Rosamunde Pilcher meets Inspector Barnaby. Each of the self-contained episodes is a quick listen for the morning commute, while waiting for the doctor, or when curling up with a hot cuppa.

This is not very demanding listening, really a cozy in the real sense of the word. The events are almost everyday occurrences, the sort of scenarios the listening audience might find themselves in. The detective duo are interesting enough: a retired NYP detective and a housewife who is also a single mum. Each episode is 2-3 hours, so achievable with a longish return journey. There is not to think about in each scenario, but not a lot of mystery either.

I think the character development of the detectives is quite well done, and Neil Dudgeon does a  good job of the narration.

About the authors
Co-authors Neil Richards (based in the UK) and Matthew Costello (based in the US), have been writing together since the mid 90's, creating content and working on projects for the BBC, Disney Channel, Sony, ABC, Eidos, and Nintendo to name but a few. Their transatlantic collaboration has underpinned scores of TV drama scripts, computer games, radio shows, and - most recently - the successful crime fiction series Cherringham.

The narrator of the audiobook, Neil Dudgeon, has been in many British television programmes including the roles of "DCI John Barnaby" in "Midsomer Murders" and "Jim Riley" in "The Life of Riley".

I believe that it is best to use Private Detective Ipswich to solve the case of cyber stalking or any form of cyber crimes as such. It is somehow noted that this is most prevalent among youngsters and teenagers. Come in touch with http://www.graingerinvestigations.com.au/ No one can as good as the Investigation Detective Brisbane in Internet crime cases.