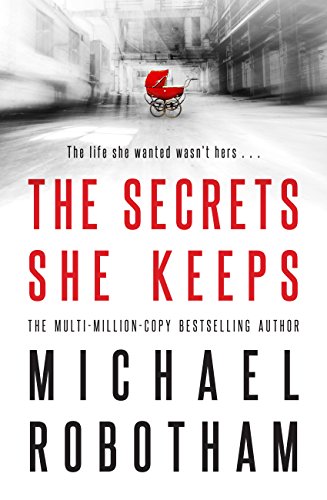 Everyone has an idea of what their perfect life is. For Agatha, it's Meghan Shaughnessy's.

These two women from vastly different backgrounds have one thing in common - a dangerous secret that could destroy everything they hold dear.

Both will risk everything to hide the truth, but their worlds are about to collide in a shocking act that cannot be undone.

Here is another cracker from Australian author Michael Robotham.

Two women, Meg and Agatha, living in suburban London, are joined by a bond of pregnancy. They will even give birth within days. But Agatha knows much more about Meg than vice versa. And they come from very different backgrounds and life experiences. They are the narrators of the story and so we often get two versions of the same events.

Initially I felt very critical of the apparent thin-ness of the "official" blurb, but then in writing this "review" I became very aware of how difficult it is to talk about the story without revealing too much. (I hope you don't feel that I've told you too much as it is).

So, let me just recommend the book to you. It is a stand-alone, told through excellent character development, and with mounting suspense and plot twists as the book progresses. Underpinning everything is a commentary on modern living.

Michael Robotham remains at the top of my list of modern Aussie crime fiction authors.

Michael Robotham is a former investigative journalist whose psychological thrillers have been translated into twenty-three languages. In 2015 he won the prestigious UK Gold Dagger for his novel Life or Death, which was also shortlisted for the 2016 Edgar Allan Poe Award for best novel. Michael has twice won a Ned Kelly Award for Australia's best crime novel for Lost in 2015 and Shatter in 2008. He has also twice been shortlisted for the CWA UK Steel Dagger in 2007 for The Night Ferry and 2008 with Shatter. He lives in Sydney with his wife and three daughters.

Certainly my favorite too.