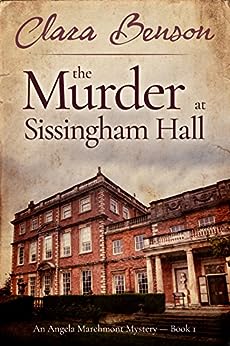 On his return from South Africa, Charles Knox is invited to spend the weekend at the country home of Sir Neville Strickland, whose beautiful wife Rosamund was once Knox's fiancée. But in the dead of night Sir Neville is murdered. Who did it? As suspicion falls on each of the house guests in turn, Knox finds himself faced with deception and betrayal on all sides, and only the enigmatic Angela Marchmont seems to offer a solution to the mystery. This 1920s whodunit will delight all fans of traditional country house murder stories.

A differently structured novel, written in the first person but not by the sleuth.

Essentially a cozy, sometimes a bit predictable, with the narrator often frustratingly blind-sided by his love for his former fiance, the wife of the victim.

Very readable though with a good balance of mystery and red herrings. It certainly passes muster as a Golden Age novel,

About the author
Clara Benson was born in 1890 and as a young woman wrote several novels featuring Angela Marchmont. She was unpublished in her lifetime, preferring to describe her writing as a hobby, and it was not until many years after her death that her family rediscovered her work and decided to introduce it to a wider audience.

Please note: the above was copied from a note at the end of the Kindle book, but it conflicts with what I found at the author's website:  which suggests an entirely different author background.
In writing the Angela Marchmont novels, my aim was not to produce a work of historical fiction, but rather to reproduce as faithfully as I could the tone and style of those original Golden Age works, since I was sure there must be many mystery fans who wished for more ‘genuine’ Golden Age novels, just as I did. In an attempt to make the experience more immersive for readers (and also, I admit, because, like many writers, I am uncomfortable with public attention), I decided to write ‘in character’ as Clara Benson, an author of the 1920s. It was a sort of challenge to myself, to see whether I could do it convincingly. I had no idea whether my little conceit would pass muster, but since I was certain nobody would buy the book anyway, I didn’t think too hard about it.

There are now 10 published novels all featuring Angela Marchmont available for Kindle and THE MURDER AT SISSINGHAM HALL is available for $0 on Amazon.