Review: THE CASE OF THE UNSUITABLE SUITOR, Cathy Ace

A SUITOR WITH THREE DEAD WIVES. JUST BAD LUCK OR SOMETHING MORE SINISTER?

Successful businessman and charmer Huw Hughes comes back to the village and sets his sights on Annie. Can the other women of the WISE Enquiries Agency unearth the truth behind Huw having been widowed three times?

Christine is enjoying a break at her family’s Irish estate – where she and the brooding Alexander face a surprisingly dangerous case of theft.

Mavis and Carol have to work with dowager duchess Althea Twyst to ensure their unsuspecting friend Annie’s safety . . . and possibly protect the lives of other villagers. And of course all this mustn’t disrupt the Duke’s annual croquet tournament! Someone seems to want it to turn out very nasty indeed. 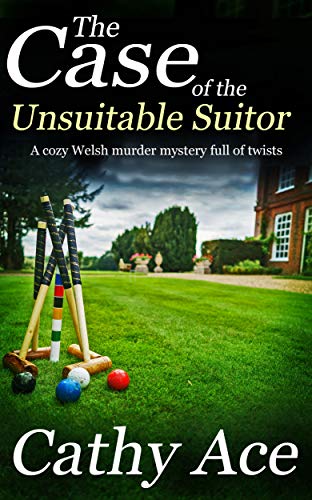 Vandalism and nasty graffiti on the croquet shed shows that someone is very upset, and there are moles attacking the croquet lawn. And then a number of people are unwell with a tummy bug, and finally there is a death. The WISE Agency is already investigating whether Huw Hughes has killed his three former wives, and now he is arrested for murder. Annie is convinced he is innocent.

In a separate plot, over in Ireland Christine is investigating the abduction of one of her household, and the operations of a criminal master mind called the Gadfly. Why is it that local police investigations in the past have not managed to get anywhere?

I've come to the end of this set of 4 mysteries and have thoroughly enjoyed them all. The format of 4 female investigators from Wales, Ireland, England and Scotland does seem to have its limitations. In each book at least one of the investigators operates "off-scene" and almost independently of the others. In each title there is more than one plot.  I have enjoyed the way each character has been given her own identity, and the way in which a number of themes have been explored. The plots are both imaginative and satisfying.

You do need to read them in order to appreciate the development of the main characters and the role of the minor characters.