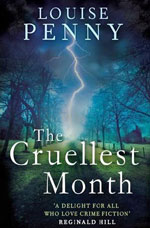 Easter, the time of rebirth, is being celebrated in the small Canadian village of Three Pines in ways that have become part of village tradition. There are dinner parties among friends, and the hiding of Easter eggs for the young to find.
On this Good Friday at the end of April Three Pines smells of fresh earth and the promise of spring. Clara Morrow is finishing an important painting and Hazel Smyth is getting ready for the weekend visit of her daughter Sophie. A witch has come to stay at the B&B and Gabri has invited everyone to a seance. And overlooking the village the Hadley house broods.

When Friday night's seance yields no satisfactory results the witch suggests a seance in the Hadley house on Easter Sunday. As the participants sit in a sacred circle and the witch calls on the house to yield up its wickedness and hatred, death arrives with a scream.

THE CRUELLEST MONTH is the third in Louise Penny's series featuring Chief Inspector Armande Gamache of the Quebec Surete. In his own words he is a prideful, stubborn and arrogant man, with enemies among the highest in the police service. He is known as a whistle blower in a matter that has not yet run its course, and even in his own team there are spies and traitors. Gamache's need to help people often borders on the self-destructive and his inability to abandon a soul in need carries the seeds of his own downfall.

When the death at the seance turns out to be murder Gamache and his team descend once again on Three Pines, renewing acquaintance and friendship with the villagers. But even among friends motives for murder exist, and the investigation is played out against real threats to Gamache's own career, his family and his very existence.

For her first novel STILL LIFE Louise Penny was the recipient of the CWA New Blood Dagger, and the CWC Arthur Ellis Award for Best First Novel. Her second novel was DEAD COLD aka A FATAL GRACE. Readers new to her novels would probably do best to read them in order, to allow the characters of Gamache and his team, and those of the residents in the village of Three Pines to develop.

THE CRUELLEST MONTH has been sitting on my "to be read" pile for some time now and I regret not tackling it earlier. The Three Pines series are sometimes labelled cozies, but really there is little that is cozy about this village except perhaps its name originally signifying safety to United Empire Loyalists over 200 years before. Under its calm exterior lie tensions between strong, even quirky, characters.

STILL LIFE: my rating 4.6
Louise Penny's first novel was runner up in the Crime Writers' Association's Debut Dagger Award in 2004, in manuscript form.
In the early morning of Thanksgiving Sunday, 76 year old Jane Neal is found dead in the woods of the small Canadian village of Three Pines. She has been shot through the heart by a hunter's arrow - was it an accident or is it murder? There are many secrets in this village and this case gets a distinguished detective from Surete du Quebec, Chief Inspector Armand Gamache. Jane had recently entered a revealing village 'portrait' into the village art competition. Her great friend Timmer Hadley had also recently died. Were the events connected? Most enjoyable, but not for the impatient, one-more-title-to-add-to my-list, reader. Be prepared to spend some time sifting the clues.

DEAD COLD: my rating 5.0
#2 in the Armand Gamache series. In the little Canadian village of Three Pines another death has occurred. A female spectator, the hated CC de Poitiers, has been electrocuted while out on the ice watching the annual Boxing Day curling match. This has to be murder but no-one saw anything. Coincidentally the victim has been living in the house that was the centre of the last murder in Three Pines, Gamache's case a year ago, the focus of Penny's debut novel STILL LIFE. Gamache renews old acquaintances in the village and we learn more about him. Do read these books in order if you can.

I just completed A Rule Against Murder (#4) and enjoyed it just as much as the first 3! Happy Reading!

I love the Three Pines setting - it's good to know that the fourth one is out. I wasn't as happy with the Cruellest Month as I was with the first two because I didn't enjoy the secondary story, but the mystery itself was lovely.

What do you think of as the secondary story Belle? The Clara Morrow one?