Some will argue that SUCH IS LIFE is not crime fiction, and it is a long time since I read it, but my recollection tells me it is full of mysteries, not the least at the time of publication, the true name of the author.

The mystery that I remember best is the one about the identity of the woman with the crepe veil, apparently disfigured for life when kicked in the face by a horse. This element is introduced in the early pages, and the "woman in the crape veil" appears throughout the story rather like the Cheshire Cat, until, 300 pages later, the mystery is solved. There are stories of a wife who disappeared, and a squatter whose friend was found shot through the heart. The author, Tom Collins, claims to be related to Wilkie Collins, best known for THE WOMAN IN WHITE and THE MOONSTONE.

Joseph Furphy, whose pseudonym was "Tom Collins", was born on 26th September 1843 in Victoria, at Yering station, near what is now the town of Yarra Glen. His parents had emigrated from Northern Ireland, and as a lad he worked on his father's farm at Kyneton. He earned his living in various ways, travelling with a threshing plant, farming, road-rolling, until he acquired two bullock teams and roamed the Riverina for over seven years f 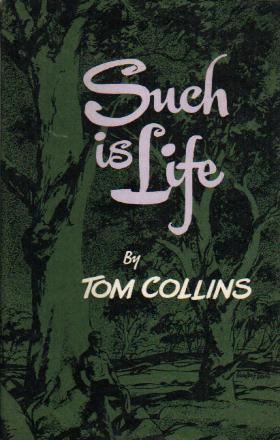 ollowing what he described as "this adventurous and profane occupation".
When drought came and his bullocks died of pleuro-pneumonia he went to work at the agricultural implement foundry owned by his brother at Shepparton. In 1904 he and his wife (he had married in 1867) went to Western Australia where, at Fremantle, his sons had started a similar foundry. He died at Claremont on 13th September 1912.

SUCH IS LIFE is a fictional account of the life of rural dwellers, including bullock drivers, squatters and itinerant travellers, in southern New South Wales and Victoria, during the 1880s.

The book comprises a series of loosely interwoven stories of the various people encountered by the narrator as he travels about the countryside. At times the prose is difficult to understand because of the use of Australian vernacular and Furphy's attempt to convey the accents of Scottish and Chinese personalities. This novel nevertheless provides an insight into the character of rural dwellers in Australia in the latter half of the 19th century.

The title of SUCH IS LIFE is said to be derived from Ned Kelly's last words.

Available for free download from Gutenberg and at Google Books.

Other articles & Reviews:Joseph Furphy left his mark on the Australian language.
The name Furphy is still in common Australian slang use meaning a "tall story". This is believed to derive from the Furphy Water Cart, produced in large numbers by Joseph's brother John, which were used to supply water to Aussie soldiers during World War I. The carts, with the family name written large on their sides, became popular as gathering places where soldiers would for a few minutes forget their hardships and the stresses of combat by exchanging their more fanciful tales. And so "It's a big Furphy" came to mean just that.

LOL - I haven't forgotten it Kerrie. I hated it with such passion when forced to read for high school English that I wrote an essay about why it was such unrepresentative twaddle and went into some detail about all the things that were wrong with it. I got an A :)

I was older when I got to read it Bernadette, which is perhaps why I didn't hate it as much. I think I had already been through the mill of James Joyce's Ulysses, and I was reading it for Australian Literature.

Yes, going back you find some of those books weren't quite as bad as you remember. Thanks, Kerrie. SCARLET LETTER for instance.

That seems to be available as a Google Book now Patti