This novel begins with a brief background to the history of Canterbury and in particular to the murder of its Archbishop in the Cathedral just after Christmas in 1170.

Antiques dealer Hazel Whitby and her Australian companion Belinda Lawrence have been asked to catalogue and value the contents of a deceased estate, the Manor House. It is just a few days to Christmas and Hazel and Belinda will be spending Christmas in Canterbury.

Professor de Gray died nearly six months earlier, supposedly from a heart attack. But Hazel and Belinda hear stories of there having been "blood on his head" and the Professor's body was cremated with almost indecent haste, the day after his death.

They have been commissioned by Miss Mowbray (who reminds Belinda of a modern Mrs Danvers) to evaluate the contents of the Manor House, which turns out to be a virtual Aladdin's Cave. Shortly after they begin work, Miss Mowbray goes up to London, and there meets with an accident.

As with the other 3 titles in this series, I enjoyed the historical background that Kavanagh uses to give depth to the story. Belinda's romance with the handsome Mark (who appeared in #2) and her partnership with Hazel provide continuity from one novel to the next. (If oyu are new to the series, I strongly suggest you read them in order). Like its predecessors A CANTERBURY CRIME is a pleasant whodunnit in the true cozy tradition. 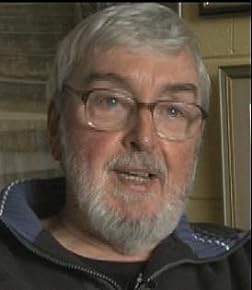 There is a growing sub-genre of mystery crime fiction known as "geezer lit" (the term is not mine). Some of them are mysteries in which "old geezers" are the principal characters, usually as amateur sleuths. Mike Befeler's RETIREMENT HOMES ARE MURDER and LIVING WITH YOUR KIDS IS MURDER are good examples of these.

There is though another side to "geezer lit" mysteries where the writer could (kindly) be said to be an "old geezer" - and surely Brian Kavanagh could lay claim to this status. Again, hoping Brian is not offended here, there are books where the main audience will be "old geezers" who love their reading.
A CANTERBURY CRIME will appeal to this audience. It is a cozy that is strongly part of the tradition. It will also appeal to those who on their travels have been to Canterbury and to the Cathedral in particular, and who enjoyed this taste of English history.

A CANTERBURY CRIME is a light enjoyable read, with a murder investigation by a couple of likeable amateur sleuths.

My reviews of earlier titles.