I'm being a bit liberal with the rules of the Crime Fiction Alphabet meme this time.

X always causes a problem, so this time I am pointing you to a review where the title contains the letter X.

THE DEVOTION OF SUSPECT X by Keigo Higashino was an audio book I reviewed here. 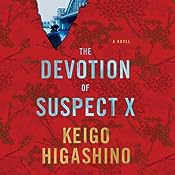 Yasuko Hanaoka is a divorced, single mother who thought she had finally escaped her abusive ex-husband Togashi. When he shows up one day to extort money from her, threatening both her and her teenaged daughter Misato, the situation quickly escalates into violence and Togashi ends up dead on her apartment floor.
Overhearing the commotion, Yasuko’s next door neighbor, middle-aged high school mathematics teacher Ishigami, offers his help, disposing not only of the body but plotting the cover-up step-by-step.
When the body turns up and is identified, Detective Kusanagi draws the case and Yasuko comes under suspicion. Kusanagi is unable to find any obvious holes in Yasuko’s manufactured alibi and yet is still sure that there’s something wrong.
Kusanagi brings in Dr. Manabu Yukawa, a physicist and college friend who frequently consults with the police. Yukawa, known to the police by the nickname Professor Galileo, went to college with Ishigami. After meeting up with him again, Yukawa is convinced that Ishigami had something to do with the murder. What ensues is a high level battle of wits, as Ishigami tries to protect Yasuko by outmaneuvering and outthinking Yukawa, who faces his most clever and determined opponent yet.

The book is translated from Japanese. The author is very popular in Japan but there is something about the construction of the story that marks it as having quite a different approach to European/Western crime fiction.

Kerrie - Very creative lateral thinking :-). It's really interesting, isn't it, the difference between Japanese and Western-style crime fiction. For me, it's a useful reminder that there's a wide variety of ways of doing things.

Wasn't sure if I posted my comment. I loved The Devotion of Suspect X (good, Kerrie, using the X!) I've put the book on our Fall reading list for my mystery group. :-)