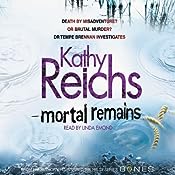 When Tempe is called to the scene of an autoerotic death, she has little idea of the tangled chain of events that will follow. Because the man whose body she is examines apparently died in a helicopter crash in Vietnam 40 years before. So who is buried in the soldier's grave?

Tempe's investigations take her to Honolulu, where she is caught up not only in the mystery of the unidentified body in the soldier's grave, but also dragged into investigating who, or what, killed the young men whose body parts have floated up onto a popular Hawaiian beach.

And as Tempe gradually unravels the tangled threads of the mystery, it becomes clear that there are some who would rather the past stays dead and buried. And when Tempe proves difficult to frighten, they turn their attention to the person who means more to her than anyone else in the world.

Kathy Reichs' work has a considerable following, increased by the fact that her titles are the basis of the popular television series Bones.

The forensic and medical detail that makes the Bones series popular is probably the aspect that I liked least about MORTAL REMAINS, and at times felt overwhelming and a little too graphic. Underneath is a good story line: the victim of a helicopter crash in Vietnam in 1968 is buried with military honours in his hometown in North Carolina. Four decades later Tempe Brennan is called to a drowning in Quebec. The fingerprints say this victim is the man who died in Vietnam. When Brennan goes to Honolulu to solve this puzzle, she learns that this is not the only ID mixup caused by inadequate forensic procedures in the 1960s.

As you will have noticed, this audio book was an abridged version. So I am not sure what was left out. I'm not sure either why it was abridged. The "full length" recording is barely 2 hours longer. The abridged version of MORTAL REMAINS was shortlisted for a Crime Fest 2011 audio award.

MORTAL REMAINS is #13 in the Temperance Brennan series and I can really only be said to have dabbled in the series. Although it appears that each book can stand on its own, there are obviously continuing threads, particularly in personal relationships between Dr. Temperance Brennan and other characters - lovers, her daughter, colleagues - that will add more meaning.

Reviews of other titles by Kathy Reichs on this blog:
CROSS BONES

Mini-review BREAK NO BONES, rated at 4.3
Dr Temperance Brennan is filling a vacancy as a supervisor of an archaeology dig for students from the University of North Carolina. The dig site on Dewees Island on contains sixteen prehistoric graves, a pre-Colombian burial ground. Dewees Island is largely a conservation easement, but the rest is ripe for development. On the penultimate day of the dig, just when they are well on the way to wrapping everything up on schedule, Tempe has a couple of visitors: local freelance journalist Homer Winborne, and Dickie Dupree, land developer and entrepreneur. As if on cue, an intrusive articulated skeleton is discovered in one of the graves. Tempe quickly realises that this body is not prehistoric.

Kerrie - Thanks, as ever, for this well-done review. I confess I haven't read a lot of the Reichs novels, either. However, that said, I agree with you that in some of the novels, there is more forensic detail that is necessary to hold the story together and give it authenticity. I enjoy a good forensics thriller, but when the focus is too much on those details, it can take away from the story.

Thanks for the review. I heard a segment of the audio book on The Book Report radio show on http://bookreportradio.com. It sounds interesting enough to make me want to read the book.