The lakes are dark and dangerous... 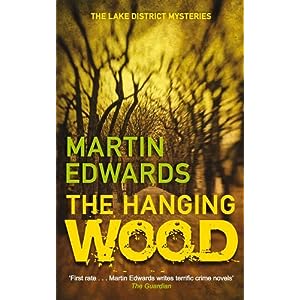 Twenty years ago, a teenage boy, Callum Hinds, went missing in England's Lake District. His uncle was suspected of having done the boy harm and interviewed by the police. When he committed suicide close to his cottage in the Hanging Wood, everyone assumed it was a sign of guilt. But the body of the boy was never found.

Now his sister, Orla Payne, who never believed in their uncle's guilt, has returned to the Lakes, and taken up a job in an atmospheric residential library, close to her father's farm, the upmarket caravan park where her step father works, and the Hanging Wood. She wants to find the truth about Callum's disappearance, and-at the prompting of Daniel Kind-tries to interest DCI Hannah Scarlett, head of Cumbria's Cold Case Review Team, in the case. Hannah is reluctant, leading Orla to demand whether she cares about justice. Hannah does care, and when Orla dies in strange and shocking circumstances, she determines to find the truth about what happened to Callum-and to Orla.

Hannah's investigation brings her back into contact with Daniel, while she tries to resolve her troubled relationship with bookseller Marc Amos. But their personal lives have to be put on hold when another death occurs, and Hannah finds herself racing against time to prevent a shocking murder as the past casts long shadows on the sunlit landscape of the Lakes.

I always look forward with some anticipation to reading the next instalment in Martin Edwards' Lake District series with DCI Hannah Scarlett and historian Daniel Kind, and THE HANGING WOOD did not disappoint.

While part of a continuing series THE HANGING WOOD works quite well as a stand alone if this is your first opportunity to read a title by this accomplished British author. I'm sure it will however send you looking for earlier titles.

Orla Payne's phone calls to Hannah Scarlett, DCI of the Cold Case Review unit at the Cumbria Constabulary, triggers the reaction Orla had hoped for - the re-opening of the case of her brother Callum who disappeared twenty years earlier - but too late for Orla herself.

THE HANGING WOOD has a nice balance of cold case investigation and other issues such as Hannah Scarlett breaking in a new "right hand."


He’d arrived in the Cold Case Review Team with a very dodgy reputation, but she was glad she’d given him the benefit of the doubt

and Hannah's personal relationship with one-time partner Marc, and the nature of her relationship with historian Daniel Kind. Daniel brings a historian's mindset to the interpretation of evidence, asking questions about the past, which nicely complement those Hannah herself is asking.

A satisfying read that explores both whodunnit and whydunnit issues.

Some earlier Martin Edwards titles are available on Amazon as e-books and I certainly hope this one makes an appearance there for Kindle owners.

Other reviews of THE HANGING WOOD

Martin Edwards is an award-winning crime writer whose fourth and most recent Lake District Mystery, featuring DCI Hannah Scarlett and Daniel Kind, is The Serpent Pool, published in February 2010. Earlier books in the series are The Coffin Trail (short-listed for the Theakston's prize for best British crime novel of 2006), The Cipher Garden and The Arsenic Labyrinth (short-listed for the Lakeland Book of the Year award in 2008.)
He has written eight novels about lawyer Harry Devlin, the first of which, All the Lonely People, was short-listed for the CWA John Creasey Memorial Dagger for the best first crime novel of the year. In addition he has written a stand-alone novel of psychological suspense, Take My Breath Away, and a much acclaimed novel featuring Dr Crippen, Dancing for the Hangman. The latest Devlin novel, Waterloo Sunset, appeared in 2008. He completed Bill Knox's last book, The Lazarus Widow. He has published a collection of short stories, Where Do You Find Your Ideas? and other stories; 'Test Drive' was short-listed for the CWA Short Story Dagger in 2006, while 'The Bookbinder's Apprentice' won the same Dagger in 2008.
A well-known commentator on crime fiction, he has edited 16 anthologies and published eight non-fiction books, including a study of homicide investigation, Urge to Kill. In 2008 he was elected to membership of the prestigious Detection Club. In his spare time he is a partner in a law firm and blogs daily at 'Do You Write Under Your Own Name?'

Kerrie - I'm so glad you liked this one as much as you did. Like you, I always look forward very much to a new Martin Edwards book, and this particular series is a favourite of mine. Thanks for a fine review and for calling attention to a terrific author.

Thank you Kerrie for an excellent post. You remind me I still have to read several novels in The Lake District series to catch up with this new instalment.