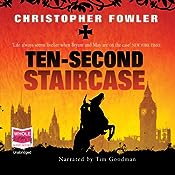 This is #4 in Fowler's Bryant & May series. It's a crime tailor-made for the Peculiar Crimes Unit: a controversial artist is murdered and displayed as part of her own outrageous installation. No suspects, no motive, no evidence - it's business as usual for the Unit's cantankerous founding partners, Arthur Bryant and John May. But this time they have an eyewitness. According to twelve-year-old Luke Tripp, the killer was a cape-clad highwayman atop a black stallion.

As implausible as the boy's story sounds, Bryant and May take it seriously when “The Highwayman” is spotted again, striking a dramatic pose at the scene of his next outlandish murder. Whatever the killer's real identity, he seems intent on killing off a string of minor celebrities while becoming one himself.

As the tabloids look to make a quick bundle on “Highwayman Fever,” Bryant and May, along with the newest member of the Unit, May's agoraphobic granddaughter, April, find themselves sorting out a case involving an unlikely combination of artistic rivalries, sleazy sex affairs, the Knights Templars, and street gang feuds. To do it, they're going to have to use every orthodox - and unorthodox - means at their disposal, including myth, witchcraft, and the psychogeographic history of the city's “monsters,” past and present.

And if one unsolvable crime weren't enough, this case has disturbing links to a decades-old killing spree that nearly destroyed the partnership of Bryant and May once before…and may again. The Peculiar Crimes Unit is one murder away from being closed down for good - and that murder could be their own.

This was a great "read". I have been listening to it for the last 6 weeks or so, so it has taken me quite a while to get through it but I've never thought of abandoning it.

Christopher Fowler delights in giving the reader/listener intellectual puzzles to solve. He has set TEN-SECOND STAIRCASE against a background of London's history. For example what do Robin Hood, Dick Turpin, and Jack the Ripper have in common? After reading TEN-SECOND STAIRCASE you'll know.

Arthur Bryant is getting on, undoubtedly, like John May, coming to end of his career. He accepts an invitation to address boys at the local St. Crispin's College. He is meant to encourage them to be law-abiding and to be careful about what he says. He has a history of provoking people. He really doesn't understand why his audience, in essence privileged and moneyed adolescents, becomes angry and he has to be escorted from the school by teachers. So, in a sense, one of the themes of TEN-SECOND STAIRCASE is about the collision of values of the older generation with those of current adolescents.

Arthur Bryant in particular is an oddity with an antiquarian knowledge of a most peculiar kind. His pronouncements contribute to a level of humour in the Bryant & May series that is unusual in crime fiction of the generally serious kind. It part of what makes this book a delightful read.

Other reviews to check
Also reviewed on MiP: THE VICTORIA VANISHES

So far I have listened to one of these but I plan to do more, I like the narrator and the stories in audio format

Kerrie - I admit I haven't read or listened to this one yet, but the Bryant and May series is a good one. I'm going to have to look out for this one.

Frustration abounds on this series. I put the first book on hold at the library months ago, and haven't gotten it yet.
I may have to abandon all efforts to read this series in order.
It sounds just too good to wait, and I love humor served up with murders.