Forensic physician Dr Anya Crichton is presented with a patient who has returned from her honeymoon with multiple sexually transmitted infections.

Her husband has none of them. She tearfully denies having had any other partners and Anya believes her. Is this a medical phenomenon or has something more sinister taken place?

Anya’s investigations into the case leads to a ground breaking study that attracts international attention. Her expertise leads to an invitation to New York to address over three hundred football players in the USA Professional League.

The enigmatic private investigator Ethan Rye is assigned to assist Anya during the summit. When an alleged rape involving five football players takes place, Anya is commissioned to investigate.
She is immediately thrust into a subculture of violence, sexual assault and drug abuse. No one is what he or she seems.

Anya soon discovers a devastating truth about the players that threatens to shut down the eight billion dollar football industry.
Now lives, including her own, are in danger…..

DEATH MASK takes forensic physician Dr Anya Crichton to New York to work with American footballers on a subject dear to her heart: violence, sexual abuse, and drug abuse, in high profile sportsmen. The content of the novel makes it obvious that it is a subject dear to the author's heart as well. I think inspiration for the novel probably came from the headline grabbing cases of sex scandals in Australian rugby (see the link below), but such cases are never far from the limelight in high profile football codes world over. Promoters of sports like American football and Australian Rugby, Australian Rules, and soccer, want to promote the sports as wholesome and for family consumption, their players as role models, but the Australian codes as well as the American ones have had to take preventative action to protect their images and to ensure their players understand the implications of their actions.

I think Fox was fearful that her readers would not understand the widespread nature or seriousness of the problem, nor would they have the technical knowledge of what the problem involved. The result has been some rather extensive didactic passages in the novel. It was almost as if she couldn't allow her knowledge or her research go to waste: on rape in sport, drugs in sport, on the rules of American football, on the effects of violent impacts on the brain, even on sights to see in New York.

I think Fox fleshes out more on Anya Crichton than I remember from earlier novels, particularly the disappearance of her younger sister Miriam at an Aussie Rules football match (based I think on the Kirsty Gordon/Joanne Ratcliffe case, and before that the disappearance of the Beaumont children). 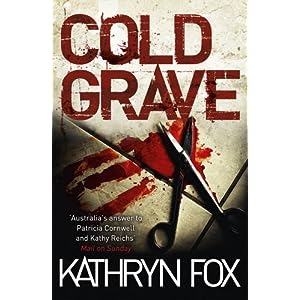 In New York Anya Crichton teams up with investigator Ethan Rye (nicknamed "Catcher")  to investigate a gang rape carried by some high profile footballers, and they make a very good team. DEATH MASK leaves the path open for another novel where Anya will work with Ethan.

In a sense COLD GRAVE due to be published in August 2012 is a sequel to DEATH MASK.

I just picked up Death Mask this week, looking forward to reading it and Cold Grave