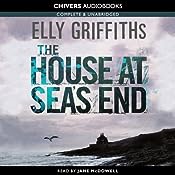 
A team of archaeologists, investigating coastal erosion on the north Norfolk coast, unearth six bodies buried at the foot of a cliff. How long have they been there? What could have happened to them? Forensics expert Ruth Galloway and DCI Nelson are drawn together again to unravel the past. Tests reveal that the bodies have lain, preserved in the sand, for sixty years. The mystery of their deaths stretches back to the Second World War, a time when Great Britain was threatened by invasion. But someone wants the truth of the past to stay buried, and will go to any lengths to keep it that way... even murder.

I hope you read the synopsis quickly because for me it reveals just a bit too much much of the plot.
The Fantastic Fiction blurb is not much better.

This is #3 in the Ruth Galloway series, and some threads of the story are continuous, so if you haven't read the first two then I really would recommend you don't start with this one. On the other hand, there is probably enough back story given so you won't feel you've missed out on too much.

There are a few themes brought together in THE HOUSE AT SEA'S END: the idea that war crimes are committed on both sides of a conflict; coastal erosion that is quite a hot topic among conservationists (I saw a Time Team TV programme about it recently); and then the ongoing relationship between Ruth Galloway and Harry Nelson. Ten years earlier Ruth had been on a forensic expedition to Bosnia to track down war crime burials.
"Coastal protection" is treated in two ways: what the Home Guard did during the war to protect citizens, as well as the rather inevitable coastal erosion by the sea. World War II is a long way in the past now and the last members of the Home Guard are in nursing homes. One of them just happens to be the grandfather of Harry Nelson's boss and at first it is assumed that he has simply died of old age. But Archie Wycliffe had something on his mind, a blood oath he took seventy years before, a ghastly secret he has kept all that time.

I thought the plot got a bit tangled in places, but nevertheless enjoyed it.
My rating: 4.6..

I've never read this author, but thank you for the introduction.

I thought she brought out well the conflict a young mother has between her desire to return to work and her worry that she might be neglecting her child or at least not giving her the best start, Margot. Perhaps readers who haven't themselves experienced this might feel too much space was devoted to it in the book. I found the book nicely balanced myself