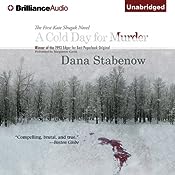 Eighteen months ago, Aleut Kate Shugak quit her job investigating sex crimes for the Anchorage DA’s office and retreated to her father’s homestead in a national park in the interior of Alaska. But the world has a way of beating a path to her door, however remote. In the middle of one of the bitterest Decembers in recent memory ex-boss — and ex-lover — Jack Morgan shows up with an FBI agent in tow. A Park ranger with powerful relatives is missing, and now the investigator Jack sent in to look for him is missing, too.

Reluctantly, Kate, along with Mutt, her half-wolf, half-husky sidekick, leaves her wilderness refuge to follow a frozen trail through the Park, twenty thousand square miles of mountain and tundra sparsely populated with hunters, fishermen, trappers, mushers, pilots and homesteaders. Her formidable grandmother and Native chief, Ekaterina Shugak, is — for reasons of her own — against Kate’s investigation; her cousin, Martin, may be Kate’s prime suspect; and the local trooper, Jim Chopin, is more interested in Kate than in her investigation. In the end, the sanctuary she sought after five and a half years in the urban jungles may prove more lethal than anything she left behind in the city streets of Anchorage.

I haven't read many crime fiction novels set in Alaska. Similarly while I have heard of Dana Stabenow I have never read one of her books. A COLD DAY FOR MURDER is the first in her Kate Shugak series of which there are now 20, the latest published just this year. See Fantastic Fiction.

I think I solved the mystery of what had happened to the two missing people, and who was responsible, about half way through the novel, but that didn't lessen my enjoyment. The characters are well drawn and the plight of the Alaskan Aleuts trying to make their way in a "modern" world is well described. As is the concern of the elders to preserve the old ways and their wish to keep the young people from leaving.

So if you are ready for a new series, maybe this is the one for you. I read it as part of my reading for the USA Fiction Challenge.

Dana Stabenow was born in Anchorage, Alaska on March 27, 1952, and raised on a 75-foot fish tender in the Gulf of Alaska.  Read more

Learn more about Kate Shugak on the author's website.

Thanks, Kerrie. I think Stabenow does a great job of depicting Alaska, and I do like her Kate Shugak character. Glad you did too.

Thanks for those kind words!