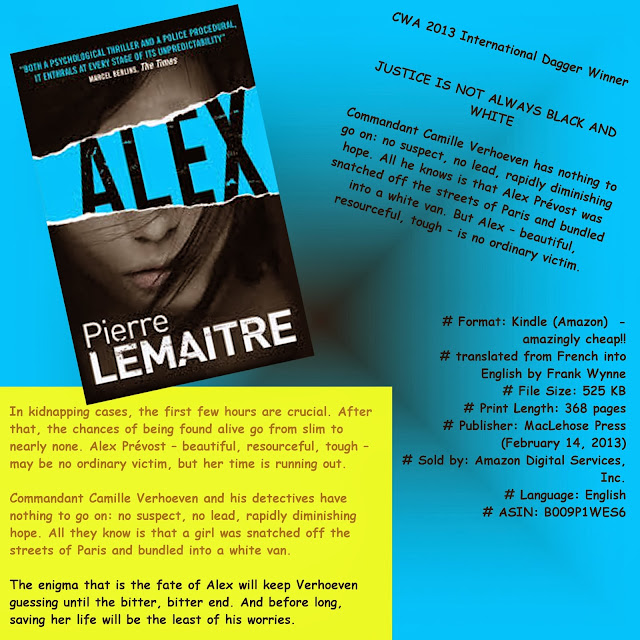 Read an extract at Amazon

ALEX came on to my reading list as a result of winning the CWA International Dagger award this year, but also because of some excellent reviews that I have read.

Many reviewers have commented on the difficulty of writing a review that does not reveal too much about the novel. That is certainly indicative of the complexity of the novel's structure which is a brachial one. The resolution of the first part of the story, the kidnapping of Alex Prevost, leads seamlessly into the second which is why she was kidnapped, and then comes the story behind that.

But that is not all there is to this novel: Commandant Camille Verhoeven is returning to this kind of investigation a considerable time after his pregnant wife was kidnapped and died as a result. So in a sense Verhoeven is facing his demons, and not even he is sure he should be taking on this case. While following this theme we explore the relationships between the members of his investigative team.

I think what makes this a great read is that it explores psychological issues and in the end questions whether justice has been done.

Author website
Pierre Lamaitre has won a number of crime fiction awards since 2006, and ALEX is his first novel to be translated into English.

In ALEX, I create a setting in Paris to give a colour and atmosphere to the story, but I try to develop themes that I believe are universal : revenge, family neuroses, violence against women, and so on.

I found it such a fresh take on the crime novel with its flipping of perspective in each section. I have a pretty good stomach for gruesomeness, but I suspect it would push some readers limits. I never thought it unnecessary though.

Kerrie - Thanks for the fine review as ever. Still haven't honestly decided to read this (although I'm very glad you enjoyed it). The violence in might be more than I want to deal with. Still, it does sounds like a compelling story.