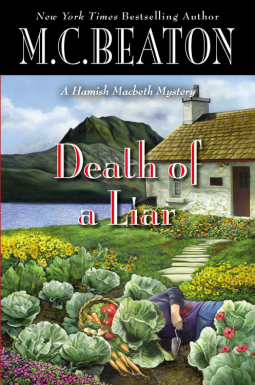 Sergeant Hamish Macbeth is alarmed to receive a report from a woman in the small village of Cronish in the Scottish Highlands. She has been brutally attacked and the criminal is on the loose. But upon further investigation, Hamish discovers that she was lying about the crime. So when the same woman calls him back about an intruder, he simply marvels at her compulsion to lie. This time, though, she is telling the truth. Her body is found in her home and Hamish must sort through all of her lies to solve the crime.

For a small area of the Highlands, there seem to be an awful lot of murders in Hamish Macbeth's jurisdiction. And yet his police station at Lochdubh is under constant threat of closure.

Despite the death rate, this is really a cozy because although we see the corpses they are not particularly grisly objects. A number of interesting characters populate the canvas and I felt we got to know some of them pretty well.

Beaton has branched out into links with an international drugs trade, as well as exploring what makes a successful rural policeman. Hamish Macbeth is a rather quirky character and it seems to me that I liked him better than at our last outing.

I like the Hamish Macbeth character too, Kerrie. And I give Beaton credit for sustaining this series as she has.

I always felt the same way about Cabot Cove.