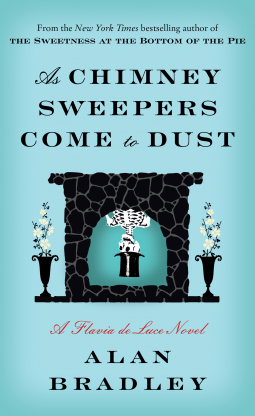 It all began with that awful business about my mother, Harriet...


Following the dramatic events at the conclusion of THE DEAD IN THEIR VAULTED ARCHES and the shocking revelations about her mother, Flavia de Luce finds herself expelled from the familiar confines of Bishop's Lacey and her beloved family home, Buckshaw, and 'packed off', as she puts it, to Miss Bodycote's Female Academy in Canada. With its forbidding headmistress and bizarre rules, adapting to Miss Bodycote's is quite a challenge. But Flavia is soon on familiar ground, when, on her first night, a mummified body is dislodged from a chimney, and she is presented with a gruesome puzzle to solve.

And the mystery of the withered corpse is only the beginning. Girls have been disappearing from Miss Bodycote's with alarming regularity, leading Flavia to wonder not only how and why, but what exactly is the academy's true purpose, and why were they so keen that she enrol? If Flavia is to avoid the same fate as the missing girls, she must enter a shadowy world where truth and lies seem interchangeable and no one can be trusted. And ultimately she must discover what it means to be her mother's daughter.

Perhaps it was because I haven't read #6 in this series, but I didn't enjoy this outing with Alan Bradley as much as I expected to.

I think it was partly because I'm not sure that the series has not become one directed at a teenage audience rather than an older adult one. There feels to be a hint of "Girl's Own" about it and Flavia's precociousness really ceased to amuse me. I kept thinking "after all, she is only a teenager", as she leapt to another misjudgement. In the long run I'm not sure why she was sent to Canada. There were surely other people on the spot at Miss Bodycote's Female Academy who knew what had been happening and could have solved the mysteries well enough. In fact, I didn't particularly like the denouement either.

Having got all that off my chest, it really was still acceptable reading, just not as good as earlier titles in the series. If I could write even half as well I'd be pleased.


I've also read
4.8, THE SWEETNESS AT THE BOTTOM OF THE PIE
4.5, THE WEED THAT STRINGS THE HANGMAN'S BAG
4.5, A RED HERRING WITHOUT MUSTARD
4.7, I AM HALF-SICK OF SHADOWS
4.7, SPEAKING FROM AMONG THE BONES

Sorry to hear this was a bit of a disappointment to you, Kerrie. I know what you mean about the focus of the series changing, and my guess would be you're not the only one who feels this way.