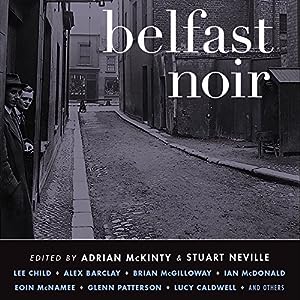 Reflecting a city still divided, Belfast Noir serves as a record of a city transitioning to normalcy, or perhaps as a warning that underneath the fragile peace darker forces still lurk.

From the introduction by Adrian McKinty & Stuart Neville: "Few European cities have had as disturbed and violent a history as Belfast over the last half-century. For much of that time the Troubles (1968–1998) dominated life in Ireland's second-biggest population centre, and during the darkest days of the conflict - in the 1970s and 1980s - riots, bombings, and indiscriminate shootings were tragically commonplace. The British army patrolled the streets in armoured vehicles and civilians were searched for guns and explosives before they were allowed entry into the shopping district of the city centre... Belfast is still a city divided... You can see Belfast's bloodstains up close and personal. This is the city that gave the world its worst ever maritime disaster, and turned it into a tourist attraction; similarly, we are perversely proud of our thousands of murders, our wounds constantly on display. You want noir? How about a painting the size of a house, a portrait of a man known to have murdered at least a dozen human beings in cold blood? Or a similar house-sized gable painting of a zombie marching across a post-apocalyptic wasteland with an AK-47 over the legend UVF: Prepared for Peace - Ready for War. As Lee Child has said, Belfast is still 'the most noir place on earth.'"

Not a set of stories for the faint-hearted, most of these are truly noir.
As with most short story collections, there are some that are very good, clever, or amusing, but there are others that tempt you to skip to the next.
They do make the reader appreciate that Irish noir fiction is alive, well, and strong.
Surprisingly, apart from the introduction, there is not a contribution from either of the editors.

Neville, Stuart:
THE GHOSTS OF BELFAST
4.8, THOSE WE LEFT BEHIND