Detective-Inspector Napoleon Bonaparte is on leave, staying with an old friend near Adelaide. Ben Wickham, a meteorologist whose uncannily accurate weather forecasts had helped farmers all over Australia, lived nearby. Ben died after a three-week drinking binge and a doctor certified death as due to delirium tremens - but Bony's host insists that whatever Ben died of it wasn't alcohol... 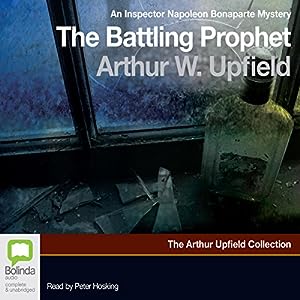 Ben Wickham, a famous meteorologist whose uncannily accurate forecasts have helped famers and graziers all over Australia, has died after a three-week drinking bout.

The doctor certifies that his death was cause by heart failure due to alcoholic poisoning.
But Ben's neighbour and drinking partner, John Luton, is convinced his friends didn't die from too much gin. He manages to lure Detective-Inspector Napoleon Bonaparte to his riverside cottage near the South Australian coast, on an unofficial visit for a spot of fishing.

Bony, thinking at first he's on holiday and paying a casual visit, is intrigued and decides to investigate.

Weather forecasts are extraordinarily important in the driest continent in the world. Farmers and graziers base their activities on them, but if drought is forecast then they will not re-stock their land, nor will they harrow in preparation for seeding. So lots of people stand to lose income if farming activities don't occur.

Ben Wickham tried to interest the Australian government in purchasing his weather predictions in advance and, when they rejected him, then approached overseas governments. Since Wickham died lots of people, not all Australian in origin, have become very interested in finding his will, and the books in which he wrote his predictions for future weather. They are all convinced that his best mate John Luton is hiding something. After Luton takes a beating from some outsider Bony realises that some major steps have to be taken. But someone higher up in government wants Bony off the scene and he is peremptorily recalled Queensland, and even escorted to the South Australian border.

A story with quite a bit of outback humour as well as some serious thought. There are some very quirky characters and the author has tried give us some idea of their colloquial language.

Of particular interest to me is that so many of the Bony stories have a link to South Australia. This one appears to be set somewhere near the River Murray. Ironically the year of publication, 1956, is also the year of the flooding of the Murray, in contrast with the drought conditions of the novel.

I've also read
DEATH OF A SWAGMAN
4.4, THE BARRAKEE MYSTERY
4.0, A MAN OF TWO TRIBES

I've read several Upfield mysteries and enjoyed them all. I'll have to track down a copy of this book. Nice review!