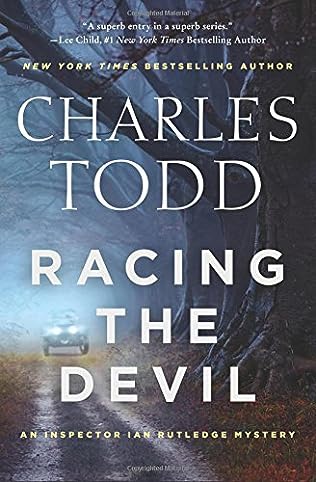 Scotland Yard's Ian Rutledge finds himself caught in a twisted web of vengeance, old grievances, and secrets that lead back to World War I in the 19th installment of the acclaimed best-selling series.

On the eve of the bloody Battle of the Somme, a group of English officers having a last drink before returning to the front make a promise to each other: if they survive the battle ahead - and make it through the war - they will meet in Paris a year after the fighting ends. They will celebrate their good fortune by racing motorcars they beg, borrow, or own from Paris to Nice.

In November 1919, the officers all meet as planned, and though their motorcars are not designed for racing, they set out for Nice. But a serious mishap mars the reunion. In the mountains just north of their destination, two vehicles are nearly run off the road, and one man is badly injured. No one knows - or will admit to knowing - which driver was at the wheel of the rogue motorcar.

Back in England one year later, during a heavy rainstorm, a driver loses control on a twisting road and is killed in the crash. Was it an accident due to the hazardous conditions? Or premeditated murder? Is the crash connected in some way to the unfortunate events in the mountains above Nice the year before? The dead driver wasn't in France - although the motorcar he drove was. If it was foul play, was it a case of mistaken identity? Or was the dead man the intended victim after all?

Investigating this perplexing case, Scotland Yard Inspector Ian Rutledge discovers that the truth is elusive - and that the villages on the South Downs, where the accident happened, are adept at keeping secrets, frustrating his search. Determined to remain in the shadows, this faceless killer is willing to strike again to stop Rutledge from finding him. This time, the victim he chooses is a child, and it will take all of Rutledge's skill to stop him before an innocent young life is sacrificed.

Some reading friends and I were talking the other day about authors aging their detectives in "real time" or not. The Charles Todd duo (mother and son) have chosen not to age Inspector Rutledge for here we are at installment #19 and we are still in 1920 with memories of World War One still fresh enough to impact of people's lives and actions. Many of the novels delve back into the past with incidents that took place during the war, and that now have impact post-war. There is a lot of information about the war and its economic and social impact on Britain, particularly on villages like the one where RACING THE DEVIL is set.

Little things like the story of Hamish McLeod are repeated from novel to novel, an attempt I think to ensure that a reader new to the series doesn't miss out on too much important background.

In many ways though Ian Rutledge feels like a "modern detective". Apart from the fact that getting from one place to another is pretty slow because mostly people are on foot or horseback (motorcars are still a rarety), and telephones virtually non-existent, Rutledge has relatively modern methods.

I wasn't totally clear by the end about all the links between the various plot lines. Perhaps I was just reading too fast in my attempt to get to the end of the book. It is a novel with a complex set of plot lines, and also lots of red herrings.

One interesting feature of this novel is that Rutledge contacts old friend Melinda Crawford, and so gets her daughter Bess Crawford (detective in the other Charles Todd series) to do some investigating for him. I have only read one title in the Bess Crawford series and this has sparked my interest to try another.

Overall, a satisfying read with just enough of a historical flavour.