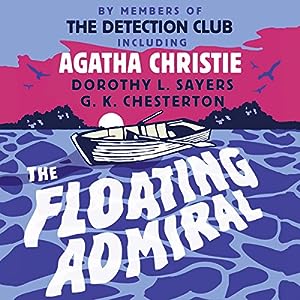 Inspector Rudge does not encounter many cases of murder in the sleepy seaside town of Whynmouth. But when an old sailor lands a rowing boat containing a fresh corpse with a stab wound to the chest, the Inspector's investigation immediately comes up against several obstacles. The vicar, whose boat the body was found in, is clearly withholding information, and the victim's niece has disappeared. There is clearly more to this case than meets the eye - even the identity of the victim is called into doubt. Inspector Rudge begins to wonder just how many people have contributed to this extraordinary crime and whether he will ever unravel it....

In 1931 Agatha Christie, Dorothy L. Sayers and 10 other crime writers from the newly formed Detection Club collaborated in publishing a unique crime novel. In a literary game of consequences, each author would write one chapter, leaving G. K. Chesterton to write a typically paradoxical prologue and Anthony Berkeley to tie up all the loose ends. In addition, all of the authors provided their own solutions in sealed envelopes, all of which appeared at the end of the book, with Agatha Christie's ingenious conclusion acknowledged at the time to be 'enough to make the book worth buying on its own'. The authors of this novel are G. K. Chesterton, Canon Victor Whitechurch, G. D. H. Cole and Margaret Cole, Henry Wade, Agatha Christie, John Rhode, Milward Kennedy, Dorothy L. Sayers, Ronald Knox, Freeman Wills Crofts, Edgar Jepson, Clemence Dane and Anthony Berkeley.

From Wikipedia
As Sayers explained in the introduction to the book, "Each writer must construct his instalment with a definite solution in view—that is, he must not introduce new complications merely 'to make it more difficult' ... [E]ach writer was bound to deal faithfully with all the difficulties left for his consideration by his predecessors."

This novel tends to prove that having a lot of famous authors doesn't necessarily make for a better novel.

As the novel develops, each author adds various plot elements such as "discoveries", new characters, and red herrings, so that by the last chapter the stage is very cluttered indeed. It was Anthony Berkeley's job to pull it all together at the end and to "make sense of the mess". The reader isn't really given a lot of help in deciding which things to eliminate from consideration and by the end we have two bodies, and a police Inspector who appears to be totally confused. The result is that the final chapter is more like a novella, very long, and final plot is very complicated.

It does help that the narrator, David Timson, is so good and provides a sense of continuity with his voice, as well as distinguishing cleverly between characters. I'd like to be able to say that I recognised the various styles of the authors, but I'm not sure that I did. You are told at the beginning of each chapter who has been responsible for this chapter.

I have talked to fellow readers about this concept, particularly in relation to teams of writers responsible for novels. Just recently we came across an Australian novel written by 5 authors, and two writers in a team like Nicci French, Michael Stanley, and Charles Todd are quite common.