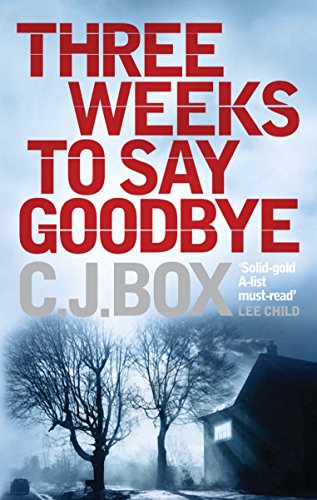 They're so sorry...
They've made a terrible mistake...
There's nothing they can do...
They have to take your daughter away.

You have three weeks to say goodbye.

After years of trying for a child, Jack and Melissa McGuane adopted a beautiful baby girl. Nine months later, a call from the adoption agency plunges them into every parent's worst nightmare: the father never signed away his parental rights, and now he wants his daughter back.

The biological father is a sullen eighteen-year-old with gangland connections, and, even worse, is the son of a well-connected federal judge who is prepared to use the full weight of his influence to get what he wants. Together they wage a harrowing campaign of intimidation and harassment aimed at destroying the McGuanes before they can fight back.

Jack and Melissa know that the boy has no love for his daughter, but what they don't know is why he and the judge want the girl so badly. With three weeks until they must legally hand over.

This is one of the titles that has been sitting on my Kindle for a number of years. C.J. Box is one of those authors I have heard mentioned often - he has captured many awards - but I have never read anything by him. THREE WEEKS TO SAY GOODBYE is a standalone.

The central theme is why would the federal judge who is the biological grandfather want to take on a baby when his son has no interest in the child. Why is he fighting so hard to get her?

This scenario truly would be the worst nightmare of adoptive parents who think they have everything sewn up, and who have fallen in love with their adopted child. Then add in friends and relatives who are literally prepared to do anything to help, and the mix becomes explosive.

For the most part the book held me. However the plot does illustrate how the most peaceful of people can be driven to violence when pressured. In a way the final stage of the plot was inevitable and logical, considering all that happened, but somehow I was disappointed.

The book has whetted my appetite for more by this author.

About the author
C. J. Box is the #1 New York Times bestselling author of over twenty-two novels including the Joe Pickett series. He won the Edgar Alan Poe Award for Best Novel (Blue Heaven, 2009) as well as the Anthony Award, Prix Calibre 38 (France), the Macavity Award, the Gumshoe Award, the Barry Award (twice), the Western Heritage Award for Literature, and 2017 Spur Award for Best Contemporary Western. The novels have been translated into 27 languages. Open Season, Blue Heaven, Nowhere To Run, and The Highway have been optioned for film and television. Millions of copies of his novels have been sold in the U.S. alone.

Box is a Wyoming native and has worked as a ranch hand, surveyor, fishing guide, a small town newspaper reporter and editor, and he owned an international tourism marketing firm with his wife Laurie. In 2008, Box was awarded the "BIG WYO" Award from the state tourism industry. An avid outdoorsman, Box has hunted, fished, hiked, ridden, and skied throughout Wyoming and the Mountain West. He served on the Board of Directors for the Cheyenne Frontier Days Rodeo and is currently serving on the Wyoming Tourism Board. He lives in Wyoming.