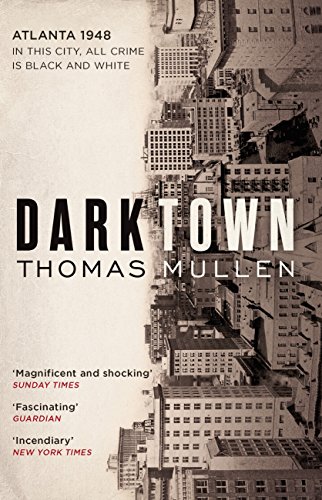 Darktown is a relentlessly gripping, highly intelligent crime novel set in Atlanta in 1948, following the city's first black police force investigating a brutal murder against all the odds.

On one side of the tracks are the rich, white neighbourhoods; on the other, Darktown, the African-American area guarded by the city's first black police force of only eight men. These cops are kept near-powerless by the authorities: they can't arrest white suspects; they can't drive a squad car; they must operate out of a dingy basement.

When a poor black woman is killed in Darktown having been last seen in a car with a rich white man, no one seems to care except for Boggs and Smith, two black cops from vastly different backgrounds. Pressured from all sides, they will risk their jobs, the trust of their community and even their own lives to investigate her death.

Their efforts bring them up against a brutal old-school cop, Dunlow, who has long run Darktown as his own turf - but Dunlow's idealistic young partner, Rakestraw, is a young progressive who may be willing to make allies across colour lines . . .

The creation of Atlanta's first black police force in 1947 comes about as a result of a promise the Mayor made to the African-American population in return for their votes in the mayoral elections. It is certainly not welcomed by the white police force who on the whole are determined that it will fail. The black population is not sure that it wants the black police force either. Some of the members of the new police force were soldiers during World War II, while others never left the USA. Throughout the novel they are constantly assessing whether they have made the right decision in becoming a policeman. The role is very challenging, the are meant mainly to just patrol the streets. If they need to arrest anyone they have to call a white patrol car or wagon to transport the person being arrested.

The background is held together by a story that links both white and black officers - that of a black girl who recently came to Atlanta from the country for work, and is then found dead.  Two black officers had seen her alive and in the company of a middle-aged white man. Although they are not supposed to investigate crimes they try to find out who killed the girl, but each step they take seems to make things worse for her family.

About the author
Thomas Mullen is the author of Darktown, an NPR Best Book of the Year, which has been shortlisted for the Los Angeles Times Book Prize, the Southern Book Prize, the Indies Choice Book Award, and has been nominated for two CWA Dagger Awards; The Last Town on Earth, which was named Best Debut Novel of 2006 by USA Today and was awarded the James Fenimore Cooper Prize for excellence in historical fiction; The Many Deaths of the Firefly Brothers; and The Revisionists. His next novel, Lightning Men, which follows the characters from Darktown two years later, will be published in September 2017.
His works have been named to Year’s Best lists by The Chicago Tribune, USA Today, The Atlanta Journal-Constitution, Kirkus Reviews, The Onion’s A/V Club, The San Diego Union-Times, Paste Magazine, The Cleveland Plain-Dealer, and Amazon. His stories and essays have been published in Grantland, Paste, The Huffington Post, and Atlanta Magazine. He lives in Atlanta with his wife and sons.