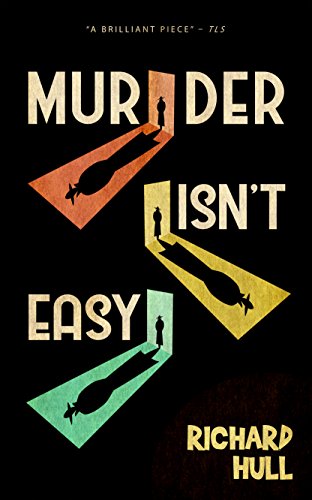 Three men, three motives, one murder. Who will come out on top? No one ever said murder was easy.

Nicholas Latimer considers himself indispensable to advertising agency NeO-aD  unlike his partners Barraclough and Spencer. Sometimes Nicholas thinks it would be better if he was running it by himself. If only some unfortunate accident would befall his colleagues

Paul Spencer has just about had it with Latimer's incompetence and wilful time-wasting. Spencer knows for a fact that he is the cog that keeps NeO-aD rolling, and wishes that Barraclough would take a stance and get Latimer out of the way.

And Barraclough? He just wants to do his job without the constant bickering of his two insufferable colleagues.

When a new client presents an opportunity for the company to hit it big, Latimer contemplates taking matters into his own hands. He hasn't considered, however, that Spencer and Barraclough might have plans of their own

Filled with so many twists and turns that you won't be able to keep track, this underrated crime classic gem will keep you guessing until it s final conclusion. With a hilarious prose style and richly developed characters, Murder Isn't Easy is a gripping page turner that we think you would love.

Unusually this novel is written from 4 points of view.  Each of the partners in NeO-aD is convinced that he is the essence of the company, and the others are a waste of space, and even perhaps hampering the company from it's true development.  Each considers that he could run the company without the others, with minimal help from the office staff. It has got to the stage where each person is considering how to get rid of the others. And so it becomes a case of murder, but who will murder who? And will they get away with it?

The book is divided into four distinct sections and eventually the deed is done. But who actually committed the murder? It is up to police Inspector Hoopington of Scotland Yard to finally deduce  what happened. He manages with considerable help from one of the office staff whom each of the partners under-rated.

This is a bit of Golden Age crime fiction with a less than straight forward plot and some unusual plot twists.
My rating: 4.2

Richard Henry Sampson FCA, known by the pseudonym Richard Hull, was a British writer who became successful as a crime novelist with his first book in 1934.