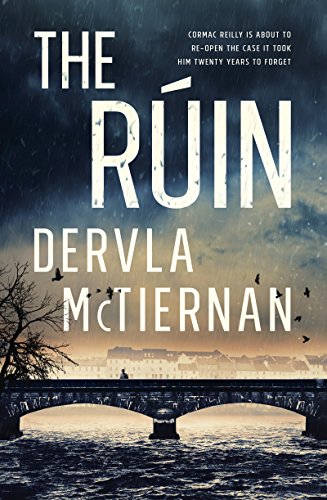 
Galway 1993: Young Garda Cormac Reilly is called to a scene he will never forget. Two silent, neglected children - fifteen-year-old Maude and five-year-old Jack - are waiting for him at a crumbling country house. Upstairs, their mother lies dead.

Twenty years later, a body surfaces in the icy black waters of the River Corrib. At first it looks like an open-and-shut case, but then doubt is cast on the investigation's findings - and the integrity of the police. Cormac is thrown back into the cold case that has haunted him his entire career - what links the two deaths, two decades apart? As he navigates his way through police politics and the ghosts of the past, Detective Reilly uncovers shocking secrets and finds himself questioning who among his colleagues he can trust.

What really did happen in that house where he first met Maude and Jack? The Ruin draws us deep into the dark heart of Ireland and asks who will protect you when the authorities can't - or won't.

Cormac Reilly has recently moved back to Galway from a top notch crime unit in Dublin. But he is finding it hard to fit in. Others at the station turn their backs on him, or try to score points at his expense. He is assigned to routine enquiries into cold cases, well below his level of experience. Then an apparent suicide turns out to be someone from his early days as a Garda. Coincidentally, it seems, he is assigned to the cold case twenty years before where he first met Jack Blake, the young man who has just died in the River Corrib.

It is hard to believe this is a debut novel, it is written with such assurance of tone. The plotting is clean with quite a number of well developed strands, while the characterisation is excellent, and relationships between characters well explored. I liked the linking between cold cases and current ones, with a clear indication of the role modern technologies can play - not just DNA but apps like Google Timeline.

An author's note at the end tells readers there is a second novel to be released in 2019. I certainly look forward to seeing it.

About the author
Dervla McTiernan was born in County Cork, Ireland, to a family of seven. She studied corporate law at the National University of Ireland, Galway, and the Law Society of Ireland, and then practiced as a lawyer for twelve years. Following the global financial crisis she moved with her family to Western Australia, where she now lives with her husband and two children. In 2015 she submitted a story for the Sisters in Crime Scarlet Stiletto competition and was shortlisted. This gave her the confidence to complete her first novel, The Ruin.

It sounds good! I'm always amazed when I read a particularly excellent book and then find out it was a debut novel. Thanks for the review. :)