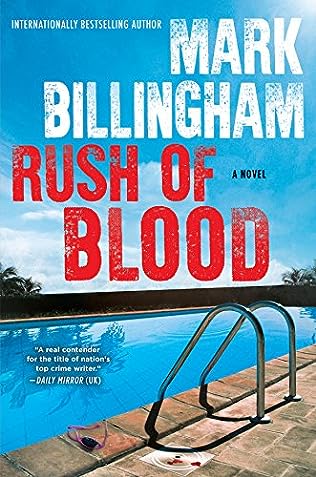 Three couples meet around the pool on their Florida holiday and become fast friends. But on their last night, their perfect holiday takes a tragic twist: the teenage daughter of another holidaymaker goes missing, and her body is later found floating in the mangroves. When the shocked couples return home, they remain in contact, and over the course of three increasingly fraught dinner parties they come to know one another better. But they don't always like what they find: buried beneath these apparently normal exteriors are some dark secrets, hidden kinks, ugly vices... Then, a second girl goes missing. Could it be that one of these six has a secret far darker than anybody can imagine? A brilliantly plotted, utterly gripping thriller about the danger of making friends on holiday.

3 couples: Angie and Barry, Sue and Ed, Marina and Dave, meet at a Florida resort, and on their last day at the hotel the intellectually challenged daughter of another holiday maker goes missing. The three British couples are questioned about their whereabouts at the time the girl went missing, and nothing seems suspicious and they are allowed to fly home.

The structure of the book is interesting: emails arranging dinner parties once they are home, chapters exploring how each couple happened to take that holiday along with other details of their marriages, interspersed with the occasional chapter in the voice of the murderer.

At their first meeting back in London the conversation inevitably turns to whether the missing girl in Florida has been found. Back in Florida We are introduced to Detective Jeffrey Gardner, in charge of the investigation. Six weeks after she disappeared the body of the young girl is found, and in London the Lewisham CID room gets a request from the Florida detective for follow up interviews of the British tourists. The task is handed to Trainee Detective Constable Jenny Quinlan who is determined to make her mark. And then a second girl goes missing, but this time in Jenny's territory.

This was a really well plotted story. It had me asking who the murderer was- trying to identify him or her from those very short chapters that kept popping up.

As it turned I was very nearly right, but the author inserted a couple of real twists at the end.