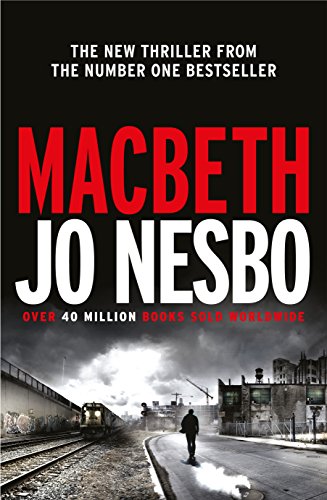 He’s the best cop they’ve got.

When a drug bust turns into a bloodbath it’s up to Inspector Macbeth and his team to clean up the mess.
He’s also an ex-drug addict with a troubled past.

He’s rewarded for his success. Power. Money. Respect. They’re all within reach.

But a man like him won’t get to the top.

Plagued by hallucinations and paranoia, Macbeth starts to unravel. He’s convinced he won’t get what is rightfully his.
Unless he kills for it.

Right from the beginning there is a dystopian feeling about this stand-alone novel unmistakeably related to the "Scottish play". In it you will meet modern versions of the main characters from the Shakespearian story, bearing in mind that his stage version was only that - a fictionalisation of what had happened in Scotland over 500 years earlier.

The setting of the novel seems rather obscure and vague, with the city not actually being named. although obviously in Scotland. The city is no longer a bustling metropolis. The drug trade and drug pushing has gone on too long. Addicts lie everywhere. There's a depiction of the struggle between opposing groups struggling for control of its underworld and drug trade: cops, bikies, corrupt politicians. The police force has been cleansed but there is rivalry between groups, at least one mole, and power struggles everywhere you look.

Nesbo has taken themes and plot lines from the Shakespearian play and put them in modern settings. This book won't be everyone's cup of tea, especially not those who are expecting a Nordic thriller. It will mean more to those who know the original play. Other reviews that I have read on Amazon have asked why Nesbo went down this path. I think he recognised a timeless story, but just to make sure he used the same names for many of the characters: Macbeth, Banquo, Malcolm, Lennox, Fleance etc., so we would recognise them too.

An interesting rather than enjoyable novel, springing from the sort of thoughts you have after seeing the Scottish play and wondering whether it has modern relevance. I think Nesbo proves that it does.