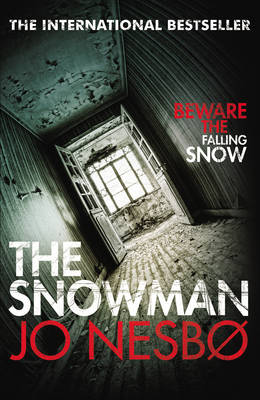 The way children turn out is determined mainly by two things: conscious decisions their parents make; and their DNA over which they have no control at all. Sometimes the two combine with totally unpredictable consequences.

Nearly twenty four years after the day in November 1980 when Sara Kvinesland spent 40 minutes making love to her nippleless lover while her son waited in the car, the first snow arrived early in November.  Inspector Harry Hole of the Oslo Police Crime Squad thought of the peculiar letter he had received a few weeks earlier. On that day too Katrine Bratt from Bergen joined the Oslo squad, and that night Jonas Becker awoke to find his mother gone.

By the middle of the next day the early snow has melted and the snowman in the front garden is on the point of collapse. When Jonas Becker tells Harry Hole that he doesn't know who made the snowman, and that during the night it was wearing his mother's scarf, Harry thinks again of the strange letter.

Has Harry finally identified a serial killer? Twelve years before there was a death where the killer's "signature" had seemed to be a snowman. And the policeman in charge of that case had disappeared without trace. And Harry has that letter...

There are many threads that hold this novel together: a celebrity who has a hereditary disease who has passed it onto his children, cases of women who have disappeared without trace, important calendar dates in the lives of American Presidents, and Harry's personal life, under acute attack from a number of angles.

Harry Hole will be permanently scarred by the events of THE SNOWMAN, but do we believe him when in the final pages he says he is going away and never coming back?

Despite its length THE SNOWMAN is a real page turner, and will not disappoint. Somehow the character of Harry Hole seemed a bit clearer to me: he still has his problems with alcohol, he is constantly focussed on his work, and there are those in the police hierarchy who see him as an easy scapegoat. But the values that make Harry the good cop that he is come come through loud and clear.

Other reviews of Nesbo titles on this blog
NEMESIS (5)
THE REDEEMER (4.8)

Other reviews of THE SNOWMAN:
Crime Scraps
Material Witness
Petrona

I am "counting" this title both in the 2010 global reading challenge and the Scandinavian Reading Challenge.

Kerrie - Thanks, as always, for a terrific review. This one's been on my TBR list for quite some time, and your post just moved it up...

Wow, 5/5. I never dare do that in case a better one comes along ;-) I enjoyed this book, too, Nesbo certainly knows how to keep the reader hooked.

I have an infinite number of 5/5s available Maxine. In 2009 I didn't use that many at all.

My reviews must be doing terrible things with your TBR Margot