Just how old was Hercule Poirot? 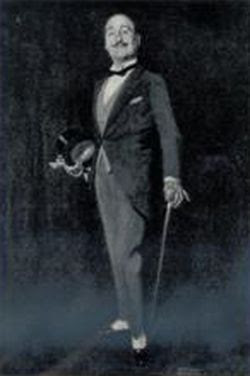 I'm currently listening to an audio recording of Agatha Christie's THE THIRD GIRL.
I'll review it when I've finished it but if you've read it you'll remember that Hercule Poirot has a client, a young woman, who comes to see him saying she thinks she has murdered someone. She won't sit down and shuffles on her feet, refusing to meet his eyes. And then she blurts out that he is too old and flees.

Poor old HP is quite upset by this and it takes a restorative afternoon tea (actually a large cup of chocolate) with his friend the author Mrs Ariadne Oliver to bring back his equilibrium.

THE THIRD GIRL was published in 1966 and even if we didn't know that, there are other elements in this story that date it - references to the Beatles and Beatniks, and even a reference to a painter who did portraits after the Second World War. Poirot thinks the paintings were created about 20 years before.  So let's say we are looking at the novel being set in 1964 or so. So how old was HP then? Hercule Poirot first appeared in 1920 in THE MYSTERIOUS AFFAIR AT STYLES and his final appearance was in CURTAIN in 1975. STYLES is thought to have been written in 1916, although not published till 1920.
In the first novel he is a refugee who fled Belgium during the First World War. We get the impression that even at that point he had been on the point of retirement.


So let's suggest that in 1920 Hercule Poirot was probably about 60. No wonder poor Norma in THE THIRD GIRL thought he was old in 1964 - my calculations make him about 104!

In fact my calculations might be a bit conservative. This timeline has him retiring in 1904, and dying 71 years later!
But I note that it sets THE THIRD GIRL in the mid 1950s. He still would have been close to a 100 then.

Kerrie - That is a funny scene, isn't it, where Poirot is miffed at his guest's refusal to engage his services because he's too old. There are references in other novels, too, to his age, where some character or other will say that he's "old, but not ga-ga," taht sort of thing. If Poirot aged in real time, as Tommy and Tuppence Beresford did, then yes, in Curtain he'd be over 100. When I read Styles, I thought of him as a bit younger than you suggested - perhaps 50. Even so, though, by Third Girl, he'd have been 90, and by Curtain, nearly 100. I suppose once he'd been established as elderly, that was enough for Christie : ).

Hmmmm...I was thinking about this myself as I read Styles just recently. For some reason I can't put my finger on I decided he was in his early 50's in this book, but that would still make him around 95 by the time of your book - possibly a tad old for the rigors of detecting!

I guess Poirot was born old. Really, he is ageless - or eternally old.

I think you have to suspend disbelief when characters are portrayed over a long period of time and just accept that they are of a certain age and somehow remain that way. Although from memory in Poirot's last case I think he is described as being frail and old. Correct me if I'm wrong. Much the same with Miss Marple, who rather alarmingly seems to find the elixir of youth and actually gets younger in the novels as opposed to the frail old lady in the original short stories.

Oh, this was funny!

But it is like Ruth Rendell´s Inspector Wexford, he has not aged in real time either.

I agree about suspending disbelief--and also about not expecting consistency in ages throughout a series that has been on-going for decades. I seem to recall that P.D. James, in one of her early books, refers to Dalgliesh losing his wife during WWIII. In more recent books, how his (first) wife died is not broached. I think Ruth Rendell has said that Rexford ages about one year for every six years that pass in real time. In one of her early books, Rexford refers to himself as "elderly." Agatha Christie uses the same word to describe women in their early-to-mid fifties in at least two of her books. Yikes!

I guess I'm heading at breakneck speed to elderly-land!

That should be WWII...it really would be something if Dalgliesh lost his wife during WWIII!