Review: SUMMERTIME, ALL THE CATS ARE BORED, Philippe Georget 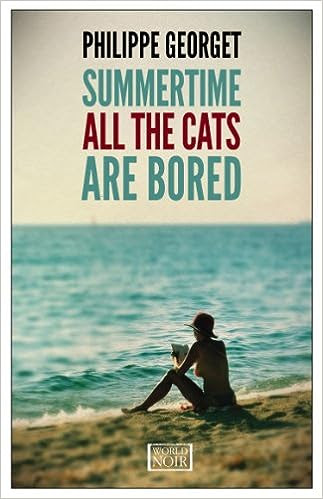 It’s the middle of a long hot summer on the French Mediterranean shore. The town is full of tourists and at the Perpignan police headquarters, Sebag and Molino, two tired cops who are being slowly devoured by dull routine and family worries, deal with the day’s misdemeanors and petty complaints without a trace of enthusiasm. But out of the blue a young Dutch woman is brutally murdered on a beach at Argelès, and another disappears without a trace in the alleys of the city. A serial killer obsessed with Dutch women? Maybe.

The media goes wild. Gilles Sebag finds himself thrust into the middle of a diabolical game. If he intends to salvage anything, he will have to put aside his domestic cares, forget his suspicions about his wife’s faithfulness, ignore his heart murmur, and get over his existential angst. He waits joylessly, patiently, and lets himself go. The stone house may end up being his grave. Who’s doing what, who’s chasing who?

The setting of the novel is Perpignan, in the Catalan region of France, near the Spanish border, where the author himself now lives. It is the height of summer; many including Gilles Sebag's own family are on holiday, and tourists from the north are flooding into the district.

Years of police work have left both Sebag and his partner Molino jaded and they have a reputation of being hard to motivate. Sebag does his best to work an "ordinary" working day but as his children and his wife leave for their summer holidays and he becomes an "empty-nester" he begins to think of nothing else but the cases he is working on: primarily the disappearance of a local taxi driver and his final passenger, a Dutch tourist.

An engrossing read. Does the town now have a serial killer or are the three cases on the books all separate events?


Read another review on Reactions to Reading.

Born in 1962, Philippe Georget is a TV news anchorman for France-3, but he is an equally successful crime writer. His debut novel, Summertime All the Cats are Bored (2013), won the SNCF Crime Fiction Prize and the City of Lens First Crime Novel Prize. His second novel is AUTUMN, ALL THE CATS RETURN.

Glad you enjoyed this, Kerrie. I think it has a solid sense of atmosphere.

I enjoyed this one too - very atmospheric.