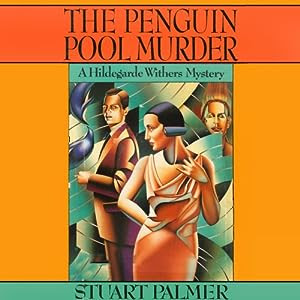 Although the Stock Market had crashed recently, it was too early for most people to predict that the Great Depression was about to get underway.

For 39-year-old spinster schoolteacher Hildegarde Withers, it’s business as usual. And part of her usual business is taking her class for an outing to the aquarium to see the penguins. Instead, she spots the floating corpse of Wall Street broker Gerald Lester and quickly realizes that Inspector Oscar Piper of NYPD Homicide isn’t up to solving this tricky case, especially when he appears ready to accept he confession of an obviously innocent young man. Red herrings, not penguins, abound.

Miss Withers has a number of questions that need answers before she’s willing to reel in the real murderer: Who did Lester’s wife meet behind the stairs? What did the pickpocket see? Who was the man in the fedora? And just how did Miss Withers’ hatpin turn into a lethal weapon?

First published in 1931, The Penguin Pool Murder was as big a hit with book lovers as it was with moviegoers when it was filmed the following year starring Edna May Oliver as Miss Withers and James Gleason as Inspector Piper.

Great pains have been taken in the production of this audio book through accents and the like to emphasise both the New York setting of this story and the period in which it is set, just after the Wall street crash.

I found the premise of an NYPD detective in investigative partnership with a spinster school teacher rather unlikely but the plot is an intriguing one, and despite the early arrest of the victim's wife's lover, there are a number of possible candidates, all of whom are explored as the plot unfolds. The truth, when it "outed", came as a surprise, because I had not considered that particular possibility, indeed did not think that particular person had any motive. But perhaps I should have asked myself why he was at the Aquarium that particular morning.

You will have noted that this is #1 in the Hildegarde Withers series. Will I read another? I'm not sure. In some ways this novel was a bit dated, but then again a number of titles in the series have recently been released in audio format, so I might.

It will be one of the last Golden Age titles I will read this year for the Vintage Mystery Reading Challenge.


About the author
Stuart Palmer (1905-1968) was a popular American mystery novel author and screenwriter, best known for his character Hildegarde Withers. He also wrote under the names Theodore Orchards and Jay Stewart.

I've been meaning to get around to Palmer and other books keep getting in the way! There is a collection of short stories from Cripped and Landrau (Uncollected Riddles) which I'm told is very good if you wanted to explore further without commiting to a whole novel, but all I can do is bring it to your attention as I've not read it myself.

2016. That will be the year I get round to Stuart Palmer. Possibly.