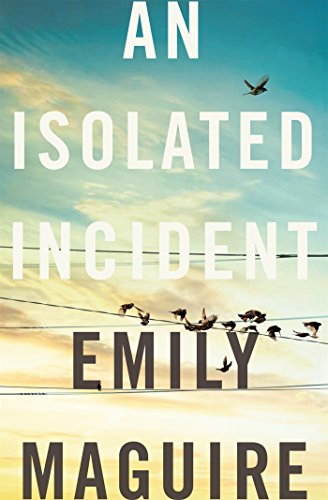 When 25-year-old Bella Michaels is brutally murdered in the small town of Strathdee, the community is stunned and a media storm descends.

Unwillingly thrust into the eye of that storm is Bella's beloved older sister, Chris, a barmaid at the local pub, whose apparent easygoing nature conceals hard-won wisdom and the kind of street-smarts only experience can bring.

As Chris is plunged into despair and searches for answers, reasons, explanation - anything - that could make even the smallest sense of Bella's death, her ex-husband, friends and neighbours do their best to support her. But as the days tick by with no arrest, Chris's suspicion of those around her grows.

An Isolated Incident is a psychological thriller about everyday violence, the media's obsession with pretty dead girls, the grip of grief and the myth of closure, and the difficulties of knowing the difference between a ghost and a memory, between a monster and a man.

AN ISOLATED INCIDENT is not really about the investigation into the horrific death of Bella Michaels, although that happens in the background for nearly three months with few suspects. It is not really even about Bella herself although we are looking over her shoulder as investigative reporter May Norman tries to understand who Bella was and what might have caused her violent end.

Through the eyes of Chris Rogers, Bella's older half sister, and May Norman we uncover the nature of the town of Strathdee, a truck stop half way between Sydney and Melbourne. After the first flush of media activity caused by the discovery of Bella's body the reporters depart but May stays on. She feels that there is more of a story to be had if she can interview a few more residents and then focus on Chris.

The novel has its focus in uncovering the sort of town Strathdee is, the violence that seems to underpin most relationships, the impact of Bella's death on Chris and also on those who barely knew her, and on May's own relationships.

There's plenty to think about in this novel, plenty to talk about in a book group if you are part of one, but be warned, you may find the scenarios and language confronting.

About the author
Emily Maguire is the author of the novels An Isolated Incident, Fishing for Tigers, Smoke in the Room, The Gospel According to Luke and the international bestseller Taming the Beast. She was named as a Sydney Morning Herald Young Novelist of the Year in 2010 and again in 2013. She is the recipient of the 2011 NSW Writer’s Fellowship.
Her non-fiction book Princesses and Pornstars: Sex + Power + Identity (2008) is an examination of how the treatment of young women as fragile and in need of protection can be as objectifying and damaging to them as pornography and raunch culture. A Young Adult version of this book titled Your Skirt’s Too Short: Sex, Power, Choice was published in 2010.
Emily’s articles and essays on sex, feminism, culture and literature have been published widely including in The Sydney Morning Herald, The Australian, The Observer and The Age.

Dang. I've been hoping to read this one but have not found a U.S. release. I need to see if a digital copy is available for sale here.

Sounds splendid -- right up my street! As Gerard Saylor says, the challenge is to find a copy available in the US.