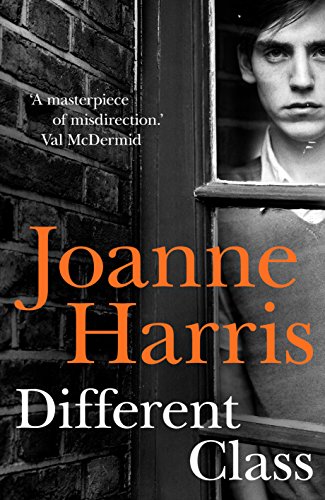 After thirty years at St Oswald’s Grammar in North Yorkshire, Latin master Roy Straitley has seen all kinds of boys come and go. But every so often there’s a boy who doesn’t fit the mould. A troublemaker. A boy with hidden shadows inside.

A new broom has arrived, bringing Powerpoint, sharp suits and even sixth form girls to the dusty corridors. But while Straitley does his sardonic best to resist this march to the future, a shadow from his past is stirring. A boy who even twenty years on haunts his teacher’s dreams. A boy capable of bad things.

Although there are roughly 10 years between the publication dates of GENTLEMAN & PLAYERS (2005) and DIFFERENT CLASS (2016), in reality there is only a time lapse of about a year and it would probably pay to read the two in sequence so as to avoid forgetting some bits from the former that are important in the latter.

The theme is similar - Roy Straitley should be preparing for retirement - his main teaching subject Classics appears to be becoming obsolete and he is having to accept female students from a nearby college into his classes. The old Head has retired and a new broom comes in, intent to turn St. Oswald's into a popular and profitable concern. The new Head is an accountant, not teacher trained, and an old boy whom Straitley once taught. And he brings with him a history that Straitley vaguely remembers, events that occurred thirty years earlier, including murder.

I found it fascinating how the author has put her finger so accurately on what modern schooling is bringing to the forefront - the relevance of formerly popular curriculum, the way education systems are being run by accountants rather than educators. Teachers though are still coming from the perspective of personalising knowledge for their pupils and concerning themselves with developing young minds. Straitley is "old school", on the surface peddling knowledge that becoming less relevant to the modern world, but underneath it all still loyal to his students, with their best interests at heart.

And yet at the same time this is crime fiction with threads that weave through a period of 30 years.

I've also read
GENTLEMEN & PLAYERS, my rating 4.8
The new academic year is beginning at St. Oswald’s expensive and exclusive school for boys. Roy Straitley, Classics master, is fighting to survive in a world that sees French and German as more relevant than the Latin he has taught for the last 33 years. The new year brings with it new students and new teachers including one that has got the job on the basis of false credentials. This teacher is dedicated not to the advancement of education at St. Oswald’s, but to bringing St. Oswald’s down. Little things begin to go wrong, a boy nearly dies, Straitley has a heart scare a few weeks before his 65th birthday, and then the stage is set for major catastrophe. It seems very probable Roy will not achieve his “century” and that St. Oswald’s will not survive a series of crises. The plotting in this novel is intricate, the author is determined not to reveal who the pretender is, and then all climaxes on Roy’s birthday. And look out for the little hints: the chapter headings, the chess icons, and the clever play on words.

JOANNE HARRIS is one of our best loved and most versatile novelists. She first sprung on the scene with the bestselling Chocolat (made into an Oscar-nominated film with Juliette Binoche and Johnny Depp), which turned into the sensuous, magical Lansquenet trilogy (Lollipop Shoes, Peaches for Monsieur le Curé). She has since written acclaimed novels in diverse genres including historical fiction, fantasy based on Norse myth, and the Malbry cycle of psychological suspense (Gentlemen & Players, Blueeyedboy, and now, Different Class). She is an honorary Fellow of St Catharine's College, Cambridge, and was awarded an MBE by the Queen. Born in Barnsley, of a French mother and an English father, she spent fifteen years as a teacher before (somewhat reluctantly) becoming a full-time writer. She lives in Yorkshire with her family, plays bass in a band first formed when she was sixteen, works in a shed in her garden, likes musical theatre and old sci-fi, drinks rather too much caffeine, spends far too much time online and occasionally dreams of faking her own death and going to live in Hawaii.