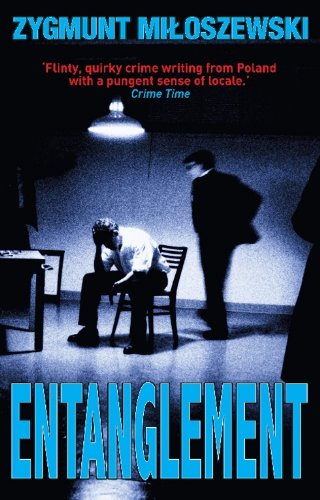 The morning after a group psychotherapy session in a Warsaw monastery, Henry Talek is found dead, a roasting spit stuck in one eye.

Public prosecutor Teodor Szacki, world-weary, suffering from bureaucratic exhaustion and marital ennui, feels that life has passed him by. But this case changes everything. Because of it he meets Monika Grzelka, a young journalist whose charms prove difficult to resist, and he discovers the frightening power of certain esoteric therapeutic methods. The shocking videos of the sessions lead him to an array of possible scenarios. Could one of the patients have become so absorbed by his therapy role-playing that he murdered Telak? Szacki’s investigation leads him to an earlier murder, before the fall of Communism.

And why is the Secret Police suddenly taking an interest in all this? As Szacki uncovers each piece of the puzzle, facts emerge that he’d be better off not knowing, for his own safety.

To be quite honest, I found this book rather heavy going. Initially I borrowed it from my local library but found the print a bit small, and so purchased it for my Kindle.

The plot centres around a group therapy weekend, with groups called constellations, in which they undertake role plays. In theory the three people participating in the weekend have had no contact with each other before. However when Henry Talek is found dead, it seems very likely that one of the others has murdered him, and that therefore there is some history connecting at least two of them. Talek's young daughter recently committed suicide and his son is very ill.

Public prosecutor Teodor Szacki consults other "experts" in this sort of therapy and gets pointers about what he should be looking for. He himself is having some sort of mid life crisis and becomes entangled with a young journalist. He learns from her that the secret police are taking an interest in his activities and his research.

Most of the story is told through Szacki's eyes, but there is an unnamed character who pops up occasionally who is having Szacki watched.

While everything got resolved in the end, I felt that, for me, it stretched the bounds of credibility and I struggled.
Perhaps it was just not my sort of book.

About the author
Zygmunt Miloszewski, born in Warsaw in 1975, is an editor currently working for Newsweek. His first novel, The Intercom, was published in 2005 to high acclaim. Entanglement followed in 2007, and the author is now working on screenplays based on The Intercom and Entanglement as well as on a sequel to the latter, also featuring Teodor Szacki.

The plot sounds interesting with group psychotherapy as part of it.

I also found this a little difficult to get into. I mostly finished it be3cause I wanted to check off the country(!). It was interesting but I don't know that I would recommend it.