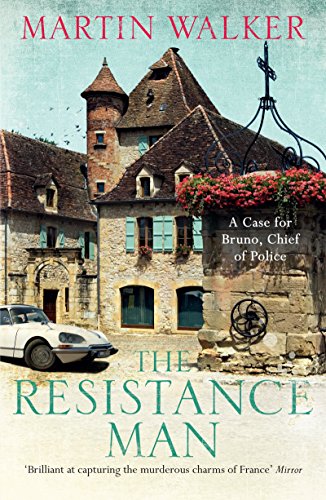 In south-west France, WW2 casts the longest shadow when some rare bank notes are discovered, notes that may have links to the legendary Neuvic train robbery in 1944 in the sixth internationally-bestselling case for Bruno, chief of police

In St Denis, Bruno, chef de police, can't get a moment's rest. Some rare bank notes have come to light that may have links to the legendary Neuvic train robbery in 1944. The investigation is fraught with issues.

Bruno is also dealing with a wave of local burglaries, which have brought his old flame, Isabelle - and their complicated history - back to the town.

Worse is to come. Tasked with piecing together these past crimes, Bruno now finds he has the more pressing matter of a body on his hands. He must now trace the links between past and present to restore peace in St Denis.

This is quite a lengthy series now, and this title comes in about the middle. Once again, as I often do with a series, I recommend that you read the titles in order. There is a development of characters and scenarios that have "history" and you will really get the best out of the book if you know what has gone before.

These are a different sort of "police procedural" simply because the French justice system works differently to that of the UK and the USA.

The books are rich in culture and descriptive recipes, as well as strong character development.

In this one the past meets the present when an elderly resistance fighter dies and an old banknote from a train robbery is found in his possession. Burglary mixes with murder and terrorism giving the plot of very modern flavour.

Former foreign correspondent in USSR, USA, Europe and Africa for the Guardian (UK), author of histories of the Cold War and 20th century USA, and of studies of Gorbachev, Clinton, the extreme right etc.
Now I write mystery stories set in the Perigord region of rural France, home of truffles, foie gras, great cheeses and wonderful wines.
In 2013, I was made a chevalier of foie gras, in the confrerie of pate de Perigueux, and also an honorary Ambassador of the Perigord, which means I get to accompany the traveling exhibition of the Lascaux cave as it goes on display at museums around the world. I also help promote the wines of Bergerac at international wine fairs, and was chairman of the jury for this year's Prix Ragueneau, the international culinary prize,
The hero of my mystery stories is Bruno, a French country policeman and former soldier who was wounded while serving it UN peacekeepers during the siege of Sarajevo. Bruno hunts, cooks, tries never to arrest anyone and, hates to carry his gun (but sometimes must. He loves his basset hound, his horse and a complicated array of firmly independent women.
The Perigord also contains more medieval castles per square kilometre than anywhere else on earth and is home to the prehistoric paintings of the Lascaux cave. Most of what we know of prehistory comes from this valley of the river Vezere, where humans have lived continuously for some 70,000 years or more. Devoted to the area and his adopted home of the small town of St Denis, Bruno instinctively understands why our ancestors chose this spot