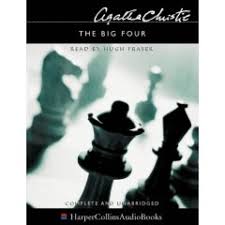 Originally published by Collins in 1927, this edition

Some time has elapsed since Hastings last saw his old friend Hercule Poirot. Hastings has been living in the Argentine on a ranch for the last 18 months, a happily married man. Poirot has set himself up in London as a consulting detective and apparently doing very well. Business complications have necessitated Hastings coming to spend some months in London and he is rather hoping to stay in his old lodgings with Poirot, although he has given him no warning of his impending arrival.

Hastings arrives to find Poirot about to leave within the hour for Rio de Janeiro to carry out an investigation for Abe Ryland, an American millionaire, the richest man in the world. Poirot confesses that his new life has not satisfied him: he is beginning to weary of the unending procession of petty problems and has in fact been very lonely, missing the company of Hastings.
Poirot has recently come across references to "The Big Four", a gang of international criminals banded together to destroy the existing social order, and to replace it with an anarchy in which they would reign as dictators. Just as Poirot is about to leave the door swings open to reveal a thin and emaciated man coated from head to foot with dust and mud. He has something to tell Poirot about the Big Four and within hours he will be dead.

THE BIG FOUR is not so much a novel as a series of short stories generated by Poirot's quest to unmask and bring the Big Four to justice. Over the next ten months he and Hastings will progressively discover the identity of the Chinese man, American billionaire, French woman and the "destroyer" who comprise the gang. Poor old Hastings will be knocked out, kidnapped, blown up and gassed several times, and Hercule Poirot's life will be constantly under threat. This a book that stands up well in a modern context though. The scenarios are at times a little far fetched, but it is tightly plotted and a fairly quick read.

In pursuing my challenge I think I am seeing the writings of Agatha Christie in a new light.
I am developing a sense of their continuity, able to see the Poirot novels for example as a series in which the main characters of Poirot and Hastings, and even minor ones like Inspector Japp of Scotland Yard, are expanded and developed. Previously I have read the Christie novels in a pretty random order. An older teacher librarian whom I once worked with was a teenager in the 1920s and she told me of the excitement of waiting for the next Christie novel to arrive. I am beginning to understand that excitement.

There are connecting themes between all the novels too. THE BIG FOUR's central theme of a master criminal or a gang of organised criminals responsible for a variety of international catastrophes mistakenly attributed to other causes, has been present in earlier novels. The novel also highlights the problems of international collaboration when Poirot fails in his attempt to persuade the French Prime Minister of the identity of the woman whom he has identified has being a member of the gang of Four.

There are signs at the end of THE BIG FOUR that Agatha Christie is ready for another protagonist. Perhaps the structure of this novel and the fact that the earlier Poirot was actually a set of short stories is a sign that Christie was finding it difficult to develop a proper full length novel around Poirot. Am I right I wonder?