It is a long time it seems since I've read a Rumpole, but the death this week of John Mortimer (1923-2009) has prompted me to make RUMPOLE OF THE BAILEY my forgotten book. The list of 27 Rumpole titles spans 33 years. They were once a staple in my crime fiction diet.
Crime fiction based in the Old Bailey with a comic side, they were a change from village cozies and police procedurals.
According to Geoffrey Robertson QC though, Rumpole can also be credited with helping to change the culture of the bar.

They established the character of Rumpole, a barrister who liked to defend rather than prosecute; who didn't really like his clients to be guilty, but accepted the inevitability of that; who had a nose for sussing out the real truth; whom you suspect had his place in Chambers because he had married well, to She Who Must Be Obeyed; who really had only one claim to immortality - The Penge Bungalow Murders.

The character though was immortalised by Leo McKern who seemed to fit the bill so well. 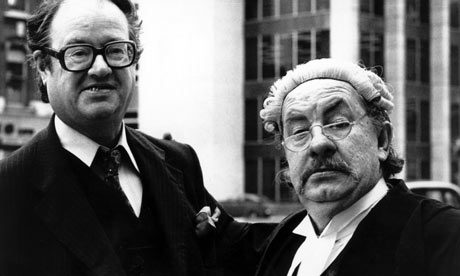 According to the books Rumpole was only a little younger than Mortimer himself. In all, seven television series of Rumpole of the Bailey were made from 1978 to 1992, each consisting of six episodes. A two-hour TV movie, "Rumpole's Return", was aired in 1980, between the 2nd and 3rd series.

I've never read any of the rumpole books. I did enjoy the television series immensley ;) Another list to add to my wishlist. Thanks Kerrie!

I haven't read them all by any menas, and once you have watched the TV series if is difficult not to read the books/stories without hearing Leo McKern

What a well-chosen photo! I have not read Rumpole either, but the picture makes me remember the TV series which I really enjoyed.

Yes, I was pretty pleased with that photo Dorte. Don't they look alike?

I remember reading a book of his with Summer in the title. And watching all of these, of course.