This is a novel that I read and reviewed 3 years ago, and until now, the review has been published on another site. This review is also being used for participation in for the Crime Fiction Alphabet Community Meme.- letter D
Released in Australia by Random House, Oct 2006

DANCE OF DEATH (published 2006) by John Case opens dramatically with a helicopter crash in Liberia. Photojournalist Mike Burke is a passenger in the helicopter and although you know he will probably survive, it is hard to see how. Within the subsequent chapters, the main threads of this carefully woven novel are set in motion. We meet Bobojon, recently a guest of the United States prison service; his uncle Hakim, Arab sponsor of terrorists; Jack Wilson, the "Ghost Dancer", would-be terrorist looking for financial backing; and then finally Mike Burke reappears. He turns up alive and well in Ireland some thirty pages (and fourteen months) after the helicopter crash, having not only survived, but been married to and then widowed from the doctor who saved his life. 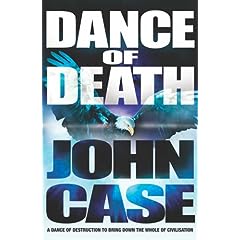 Jack Wilson, the "Ghost Dancer", is a brilliant mathematician, part American Indian, and out for revenge for injustices to his 'people'. He believes that he knows how to disable the United States through a terrorist act, but he needs backing. His former cell-mate Bobojon lines up a task. Jack must deposit some suitcases in a passenger line in Washington D.C. airport, and walk away from them. He does so, believing that they will explode. His actions are captured on surveillance television and the police officer viewing the tape realises that the case-depositor has been involved in some sort of test. Meanwhile, in Ireland, Mike Burke is now working for his father in law, setting up limited liability corporations with off-shore accounts and paid directors. When "Francisco d'Anconia" meets with Mike the first of the pennies drop in this complex story.

In many senses DANCE OF DEATH is a thriller with global appeal. The central theme is terrorism, a sure seller in current times. The principal characters rove the globe and we meet them in a variety of locations including Ireland, the United States, Russia, Turkey, and Slovenia. This can make the sequence of events confusing at times, particularly as chapters are often subtitled with a location and a date. On the other hand, it heightens the sense of a number of threads marching inexorably towards a final resolution. As the threads converge, the tension mounts, and the reader is left in no doubt about what the possible outcome is. This is a thriller that is hard to put down.

John Case is the pseudonym of Jim and Carolyn Hougan, husband and wife, both published authors in their own right. Jim Hougan is also an award-winning investigative journalist and broadcaster. For me this discovery helps explain what felt, as I read, was a certain patchiness in the story flow. It was as if the author had changed his story-board without attendant revision of what he had already written. See the John Case website.

DANCE OF DEATH has also been released with the alternative title GHOST DANCER. For those who are left wondering how fanciful the terrorism in the novel is, Case has included a final chapter of acknowledgements outlining the research that inspired him.

(2004)
This is the only other John Case title that I have read and it struck a chord with me, as do all books about disappearing children.
Twin six year olds are kidnapped from an amusement park while on an access visit with their father. Every parent's nightmare. Alex Callahan is a television journalist, a foreign correspondent and he can't be sure that the disappearance of his sons at the Renaissance Faire is not connected to something he has be involved in through his work. As the days pass, the police search is scaled down, the original detective is taken off the case, and Alex decides to use his investigative powers to find his children. An engrossing read.

Oh gosh another author I don't know. I'm not sure the terrorism book is my thing but the other one you mention sounds good.

MURDER ARTIST was one scary book Bernadette, although I think I remember the ending was a bit belief-stretching.

I am currently reading a book 72 Virgins by Avi Perry, which deals with global terrorism. In India, we are facing the terrorist attacks almost everywhere.Dance of Death does interest me.

Thanks for posting about the book.

Kerrie - Like Bernadette, I'm not familiar with John Case, either. Overall, the story sounds really compelling. That kind of thriller isn't usually what I'd choose, but this might be an exception... Thanks for the review.