This week's contribution to Pattinase's Friday's Forgotten Books comes from my records of 1993.

DEADLY VARIATIONS (1985) was the first in the Mark Holland Mystery series.
Underneath the book cover on Fantastic Fiction is a recommendation by Erich Segal:
"Paul Myers bids fair to becoming to music what Dick Francis is to racing."
Well, I remember the Dick Francis titles pretty well, but not a lot about Paul Myers.

Publisher's blurb:
Seven years ago, Mark Holland left British Intelligence and a woman he loved because the duplicity in his life was unbearable. Now, successful as a classical music agent in Geneva, and in love with his beautiful assistant, he is understandably perturbed when an ex-colleague from the Department cajoles him into taking on one last assignment. His wariness turns out to be justified, as the job requires that he not only manipulate the trust of a man whose life he once saved, but also that he endanger the life of his ex-lover as well. 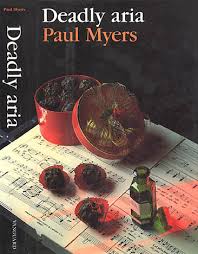 There's this rather unflattering addenda:
Myers writes at too slow a clip (and his plot turns are too facile and few) for him to generate much suspense, but he does have a moving, poetic knack for capturing the flavor of certain cities particularly New Yorkand in conveying the sophisticated world of international concert stars.

An Amazon reviewer says that when it came to music Paul Myers knew what he was talking about!

I must have liked the books because I read the first 3 in the series as far as I can see. DEADLY VARIATIONS appears to have been fairly short, at 197 pages in hardback, so perhaps that's why I read 3.

In 1993 Myers published a non-mystery called CONCERTO, and in 1998 a biography of Leonard Bernstein in Phaidon Books's 20th Century Composers series.