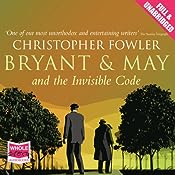 Two small children are playing a game called 'Witch-Hunter'. They place a curse on a young woman taking lunch in a church courtyard and wait for her to die. An hour later the woman is indeed found dead inside St Bride's Church - a building that no-one else has entered.

Unfortunately Bryant & May are refused the case. Instead, they are hired by their greatest enemy [Oscar Cassavian of the Foreign Office] to find out why his wife has suddenly started behaving strangely. She's become an embarrassment to him at government dinners, and he is convinced that someone is trying to drive her insane. She has even taken to covering the mirrors in her apartment, and believes herself to be the victim of witchcraft.

Then a society photographer is stabbed to death in a nearby park and suddenly a link emerges between the two cases. And so begins an investigation that will test the members of the Peculiar Crimes Unit to their limits, setting Arthur Bryant off on a trail that leads to Bedlam and Bletchley Park, and into the world of madness, codes and the secret of London's strangest relic.

As the members of the Peculiar Crimes Unit dig behind the city's facades to expose a world of private clubs, hidden passages and covert loyalties, they realise that the case might not just end in disaster - it might also get everyone killed.

I've been listening to this great audio book, driving the car, for about 2 months now, but today I couldn't wait any longer to hear the rest and listened to the last hour.

For those who haven't met the series before: London's Peculiar Crimes unit is always under threat of closure. Basically they deal with crimes no-one else likes and the principal detectives are the elderly Arthur Bryant and John May. Arthur certainly should have been retired twenty years ago but May has a great tolerance of his foibles.

What I like about these books is the complexity of the plots, the fact that there is almost always some historical detail that Arthur Bryant knows that relates to the murder being investigated. The appeal of the plots is related to the peculiarity of the crimes. Add to that the quirkiness of Arthur Bryant himself and the people he consults.

And running through it all, the author's sense of humour.

Tim Goodman does a wonderful job of the narration.

Kerrie - I like this series too. I like the sense of humour in the novels and the characters of Arthur Bryant and John May are so well done I think. I'm glad you enjoyed this one.

Glad you enjoyed it, I'm not big on listening to books, but I shall try again.

Sounds like a good one, but am daunted to sheer quantity of book piles and lists here.

Will keep it in mind; everything appeals to me about it.