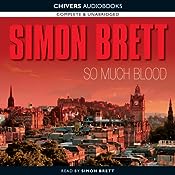 Charles Paris returns again, in a fringe show at the Edinburgh Festival, with another nubile girl to provoke him, his accommodating wife to console him and a gory murder to challenge him.

Edinburgh and the Festival are both background and foreground with Charles flitting between a production of A Midsummer Night’s Dream, a ‘mixed-media’ satire, a late-night revue and his own one-man show on Thomas Hood. Then a fading pop star is murdered, there’s a bomb scare in Holyrood Palace and someone makes a suicide leap from the top of the Rock….

There is something special about an audio book when the narrator is actually the author, especially when it is really well done as SO MUCH BLOOD is.

This title comes early in the Charles Paris series (which by the way has a new title, the first for 16 years, published this year.) Charles isn't quite the dipsomaniac he becomes in later books, and his marriage still clings to some vestiges of life. All the books in the series are connected to Charles' life as a barely successful actor.

Although there is one gory murder, SO MUCH BLOOD is really a cozy. Charles Paris is rather easily led and makes some basic mistakes in his judgment of those around him. He follows some red herrings, and so for that matter did I. A lovely enjoyable read.

I've written about the Charles Paris series before in connection with Friday's Forgotten Books:
CAST IN ORDER OF DISAPPEARANCE
Who killed Marius Steen, the theatrical tycoon with a fortune to leave his young mistress Jacqui? And who killed Bill Sweet, the shady blackmailer with a supply of compromising photographs? Charles Paris, a middle-aged actor who keeps going on booze and women, takes to detection in Cast, In Order of Disappearance, by assuming a variety of roles, among them that of a Scotland Yard Detective-Sergeant, and the results are both comic and dramatic. As the mythical McWhirter of the Yard, he actually precipitates the crime; as one of the blackmailer's victims, he finds himself in bed with the blackmailer's wife; as a small-part player in a horror film (The Zombie Walks), he gets shot at by a murderer. And he arrives at the solution by way of the petrol crisis and an abortive attack of the German measles. It's a light-hearted frolic that is, at the same time, a beautifully ingenious puzzle, and it fizzes with fun and wit.

Simon Brett is also the author of the Fethering series.
I've also reviewed the following titles from that series.

BLOOD AT THE BOOKIES
THE POISONING IN THE PUB - this review also includes some mini-reviews of 6 other Fethering titles.
4.4, THE SHOOTING IN THE SHOP

Kerrie - Oh, it's good to hear you liked this one. I have a fondness for this series and how nice that Brett actually did the narration for this one too. I think that really adds to the audio experience when the author is also the narrator.